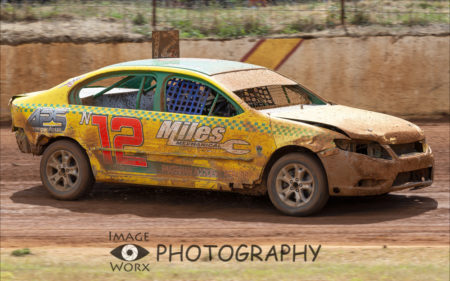 On Sunday the Junior Standard Saloons competed in the second ‘Melbourne IT Support’ Junior Jam and with collaboration between the sponsor and the host club Drouin Speedway, it was decided it was best to run two separate grades of drivers on race day with an Experienced group and a Developing group of race drivers competing amongst themselves.

Fyfe took the early lead in the first of the heat races for the experienced group whilst Stuchbery and Cecil battled behind for second spot. Half way through the race Stuchbery took the race lead. Miles moved forward quickly from the rear of the field to third and at the end of eight laps Stuchbery had won from Fyfe, Miles, Cecil, Carey, Braz, Westwood and Barwise.

Jackie-Anne Angus and Zoe Hunt started at the front of the in the first developing drivers heat race with Hunt to the front as they finished lap one. Tannah Lee stuck his nose in for a run in second place and due to on track incidents the stewards called a halt to the race early. Hunt took the win from Tannah Lee, Walker, Jackie-Anne Angus, Breanna Lee, Joynson, Murray, and Justin Angus.

Miles led from start to finish in the second heat for the experienced group with Cecil just behind him at .260 of a second. Stuchbery was third then Carey, Barwise, Fyfe, Braz, and Westwood. In the second of the developing drivers heat races, Joynson from the front row was able to stretch a bit of a gap away from the others in the field as Hunt and Walker fought for second spot. Joynson took a win some seven seconds in front of the others with Walker, Hunt, Tannah Lee, Breanna Lee and Justin Angus all finishing this race.

Another front row start in the third round to Miles in the experienced group of drivers finished with him ahead of Stuchbery this time by .540 of a second. Barwise was third in his best run of the day in the heat races then came Carey, Fyfe, and Braz with Cecil a non-finisher and Westwood crashed. Walker then won the final heat for the developing drivers whilst Hunt and Joynson battled for second before Joynson dropped out of the battle leaving Hunt just behind Walker at the finish line then Tannah Lee who past Joynson who finished fourth. Breanna Lee was next with Jackie-Anne Angus and Justin Angus finishing also.

In the first final for the experienced drivers Stuchbery and Miles started at the front and it would be Stuchbery getting the best of the start and entering the dogleg first. On lap thirteen of fifteen Stuchbery left a gap for Miles to take the lead and on the final lap Stuchbery as Miles exited the dogleg tried to make a pass that connected with the lead car and impeded Miles run. As officials were about to give Stuchbery the chequered flag, Stuchbery advised them that he felt he impeded Miles and the show of great sportsmanship gave the officials new choice accept to give the victory to Miles from Stuchbery who was put back one spot, Carey was third, then Cecil, Barwise, Braz and Fyfe rounded out the result.

In the developing drivers final Walker and Hunt began at the front of the field to resume their day line battle with hunt getting the better of the starts and the lead of the race. Tannah Lee settled into third. Murray and Joynson were in a scrap for places also. On lap eleven of twelve Hunt came unstuck in the dogleg going offline and into a course tyre allowing Walker and Tannah Lee to pass before Hunt was able to get back on track and bring herself to speed. At the chequered flag, Walker took the win from Tannah Lee, Hunt Breanna Lee, Jackie-Anne Angus, Joynson, Justin Angus and Murray was a non-finisher.

Nathan Miles won the fastest heat race of the day in 3:29.660 and the final for experienced drivers went non-stop over 6:04.806. Cecil completed the fastest one lap out of any drivers with a 22,416 in the experienced driver’s final picking up the ‘Fully Send’ award and with the fastest Open Standard Saloon on race day only 22.416 for Chris Miles, the seniors are going to be in trouble when Harry Cecil steps up.

The ‘Quickest Chick’ award went to Zoe Hunt making up for not taking the win in the development driver’s race. Her fastest lap of the day of 25.624 would have put her at a pace of around sixth in the experienced driver’s field. This is the fourth Junior Standard Saloon final in a row she has been the quickest chick.

Whilst we do not want our Juniors to crash or be hurt, we give out an award to help with the encouragement to keep going. Jackie-Anne Angus got the ‘Sickest stack; award however it has to be said, that her fifth placed finish in the final is showing she is growing in confidence behind the wheel.

Justin Angus picked up the most improved rookie driver of the day. Justin started lapping at 47 seconds a lap, before flying around in 30 seconds in heat two and reaching the 29 second mark in the third heat despite going through a dogleg circuit for his first ever time.

The Junior Standard Saloon competitors soon head to Alexandra for their next series round event where drivers such as Damon Ingram the Victorian champion and his brother Chase Ingram could be back in the field and potentially Owen Cecil also who was unable to compete in the Junior Jam.

The front runners in the class are very quick and pick up the pace further as they continue to get laps in the bank. By all reports the kids loved the turn three and four exit of the dogleg as they drifted out of it and through the turn and those that were apprehensive to begin with really enjoyed themselves by the end of the days racing.