Grassroots drifter getting tuned in on track

Grassroots drifter getting tuned in on track 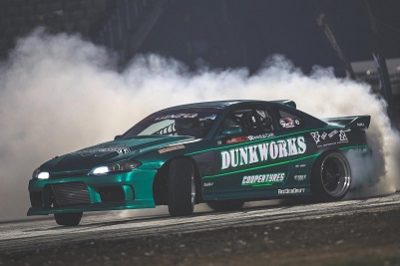 While a lot of testing and tuning takes place on the pit lane or in the workshop, Link ECU D1NZ Pro-Sport Series newcomer Ben ‘Beedub Drift’ White is shaking things up.

The 2018 series debutant sits 18th in the standings heading to the second round of the series at Levels Raceway in Timaru over March 9-10.

After several years of track days and grassroots drift events, White decided to give his first ever car, a Nissan Silvia S15, an overhaul.

The goal was to bring something new to the series. He’d been running the stock engine since he bought the car, so opted to shoehorn a V8 into the car.

“I’ve been chasing the next thing with this car ever since I got it,” White said.

“I had the SR20DE, and the next thing was a bigger engine. I’m a sucker to do things different. I like to stand out and I liked to be noticed.

The Silvia is running a standard VH45DE Nissan V8 found in the luxury line Nissan President. The engine is hard to come by in New Zealand, akin to that of the Toyota Century V12 engine, which are exceptionally hard to find domestically.

White has barely touched the internals of the engine, but with all the added parts its pushing close to 430hp and 500ft of torque.

The car runs a Steve Murch HX40 Holset Turbo “with all the goods around it”, and a 50mm Turbosmart external wastegate. Add to that adjustable fuel pressure regulators and plenty more to give it some extra juice.

The car is straight-pipped, but the turbos mean the car is kept relatively quiet.

However, it’s the brain of the car where things get interesting.

White’s interior isn’t remotely close to stock standard. Instead of analogue gauges, White’s dashboard features a tablet stripped of all its operating system. Instead it runs a custom-made operating system and is then connected to a Link ECU.

By his side is a numeric keypad that he uses as hotkeys to navigate the tablet and choose built-in presets.

The system was built by Russell Cole at Cole Customs Electrical and gives him the ability to live tune the car on the fly.

“Russell can live tap into the car from anywhere in the world and configure mapping, check fuel pressure, literally anything.

“A good example was at Manfeild for our first test session. He could see where I was coming on and off the power, where I was switching and how the car was reacting to all of that. We’re able to make adjustments as we were going.

“The other cool feature is that it has a speed sensor on it, so he can work out what entry speed I’m at, where I was doing better and where I wasn’t. He can effectively adjust a timer set in the ECU for a light that comes on the dash to know when I’m in the sweet spot.

“It blows my mind. With the small adjustments that Russel was making on the side of the track, you could feel it straight away. As if you were at Blastacars and they were adjusting your speed, it’s crazy stuff.”

Ultimately the goal is to get White into a rhythm and to the point where he can be contending for podiums and wins.

The technology will help him hit his marks and gives him the ability analyse his own driving. However, he also said it’ll give his team the data they need too.

“I think the best part is that it’s going to help the team a lot and get the car really dialed in for each track.

“We’ll have so much data logging and the guys we’re working with come from a racing background, so they can take that info, interpret that, and make adjustments accordingly.”