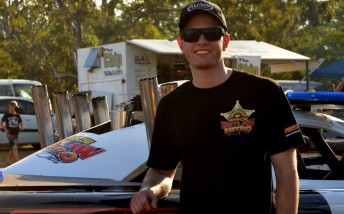 The 20 year old grandson of the late Roly Leahy will fulfil a long-held dream for his grandfather this weekend at Willowbank Raceway when he competes in Roly’s ‘Forever Young’ Front-Engined Dragster as part of Sunday’s Nostalgia Drags event (10 August).‘Forever Young’ and its late owner are legends of Australia’s drag racing scene, and while Roly may be sorely missed he will never be forgotten thanks to the efforts of his sons Greg and Peter Leahy.

Along with the rest of the Leahy family, the brothers have been journeying to the United States each October since their father’s passing in attempts to achieve their father’s dream of going 200 miles per hour (approx. 321kmh) at California’s Famoso Raceway, where Roly himself raced in 2007 and 2008.
In 2013, they achieved this with Greg at the wheel and Roly’s ashes on-board, signalling that it was time to bring the dragster home so that Josh – son of Greg and the oldest of the Leahy grandchildren – could take the reins as Roly had always wanted.“In the four years of pursuing the 200 there was a lot of chaos, some crashes and even the death of our close friend and crew member Mick Atholwood, but in 2013 we finally managed to go 200.8mph in honour of dad and also Mick in what we all still refer to as grandpa’s race car – nobody owns it, it is his and we are just the guardians of it,” said Greg Leahy.“He had always said that Josh would drive the dragster one day, so when he passed away, we asked ANDRA to put his license number on hold and now that number has been handed to Josh ready for this weekend.“It is good to have the dragster home with us now, and it is very special to know now that my son Josh will be driving it in his grandpa’s honour – I don’t think there is going to be a dry eye in the house the first time he goes down the track with his grandpa’s ashes sitting above his head in its little urn behind the roll cage.“This is going to be very special for all of us, for my brother Peter and me and Josh, and the whole Leahy family – the wives, the grandkids, and everyone that has been involved over the years.“There were more than 700 people at dad’s funeral, so I think there will be a lot of people out there this weekend who come out to see the car and Josh in action, and we hope they will come up and tell us about their Roly story – everyone seems to have one!”For Josh Leahy – driver of the Nitro Sherriff Wheelstander in the Aeroflow Outlaw Nitro Funny Car Series – the weekend is expected to deliver mixed emotions.“I am really excited, I can’t wait to do this for grandpa,” said Josh Leahy, an accountant who is currently living in Canberra.“I am a bit nervous but I am sure I will be okay once it comes time to sit in the car, although I think it will be a case of mixed emotions also – I know my grandpa always wanted me to drive his car so it is going to be a very special moment but will also be quite sad as well.“There is a little bit of pressure given how much this means to everyone, but I will just be going at my own pace and learning the car on-track – I have learnt just about everything I need to know about this car over the past 10 years, with dad and I rebuilding it from the ground up with grandpa, so it will be just learning how to drive the car which is quite a bit quicker than what I am used to.“I really want to thank my dad and also my Uncle Pete for letting me race grandpa’s car, it means so much to me and I think all of us are going to have my grandfather in our thoughts when we turn up to the race track for this weekend, with all we do dedicated to him.“I know all of the family including the other grandkids are going to be there to support me, and it is going to be such a great feeling to get down to the bottom end (of the track) and see them all there – it really is a family affair, and I feel very privileged to be the first Leahy grandkid to be given this opportunity.”Peter Leahy will not only be on-track to support his nephew, but also to undertake some passes of his own in the Super Bad Outlaw Nitro Funny Car.“It was always dad’s wish for the grandkids to have a drive when they were old enough and I am over the moon that Josh is having a go, with my niece Chelsea and son Cooper next in line if they want to have a drive,” said Peter Leahy.“Josh is a great driver and I am confident he will do well, it is a big responsibility and I know he will do a great job and am wishing him all the best of luck.“I can’t wait to get on track myself at this event, the Nostalgia events are just awesome and with some testing at the recent Mopar Sunday delivering us our first five second pass we are looking forward to a great atmosphere and hopefully more five second passes this weekend!”Joining the Leahys on-track will be more than 140 racers across the Top Eliminator, Quick Eliminator, Gas, Hot Rod, Vintage Gas, US Muscle, Aussie Muscle, Retro Bikes and Nostalgia Super Stock categories, with all the action set to kick off with qualifying from 9.00am and racing from 1.00pm. Spectator tickets are available at the gate for $25 for adults and $20 for students with ID, while children aged 13 and under gain free entry.

Also on-site will be a Show and Shine with event attendees able to enter their vehicle into the show for no extra cost – they need only take their vehicle to the allocated Show and Shine area once paying their admission at the gate. Judged categories will include Best Ford, Best GM, Best Mopar, Best USA Vehicle, Best Hot Rod and Best Australian Vehicle, with trophies presented around 2.00pm.