Grand Final to Lack, but Scheuerle is champ

Grand Final to Lack, but Scheuerle is champ 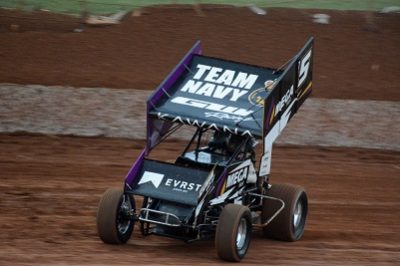 On an evening that proved as unpredictable as it did entertaining, Peter Lack put a wretched season of misfortune behind him to win the final round of the East Coast Logistics Sprintcar Track Championship at Ausdeck Patios Archerfield Speedway on Saturday night (May 26). Running the high line on a track that remained super juicy through the night as a result of afternoon rain that threatened to curtail proceedings, Lack had two stints at the head of the field enroute to nabbing a morale-boosting win. In finishing second, Andrew Scheuerle wrapped up the championship, while Mitchell Gee put in a mighty run from 17th to finish third ahead of Brock Dean and Kevin Britten.

In the final round of the Polar Ice Midget Track Championship, New Zealand’s Taylor Clarke prevailed in the feature race, leading Mark George and Cal Whatmore to the chequer.

No surprises in the final round of the KRE Formula 500 Championship Series with Australian champ Liam Williams leading all the way to defeat James Kennedy and Kristin Brown, while a spectacular end to the Compact Speedcar feature race resulted in Tim Farrell clinching the win ahead of Corey Stothard and Robbie Stewart.

After a delayed start to proceedings courtesy of late afternoon showers, 29 cars hit the track for Sprintcar qualifying and with the track improving through the course of the session, it looked as though the youngest driver in the field was going to top the timesheets when Randy Morgan stopped the clock at 12.739. However, the last group to hit the track had other ideas and it was Stewart Craig who ultimately emerged on top with a 12.484 effort to edge out Brodie Tulloch (12.622) and Morgan. Saving his best performance for the season finale, Andrew Corbet timed fourth quickest ahead of Dan Murray, Bryan Mann, Scheuerle and Luke Oldfield, with Karl Hoffmans and Mitch Gowland rounding out the top ten.

Brent Kratzmann was untroubled in winning the opening heat from Britten and Mann as Scheuerle suffered an early setback when a turn two territorial dispute put him out of action.

The first sign that Lack was in the midst of a change in fortunes came in heat two when he pounced to take the race after the battle for the lead between Gee and Oldfield became so close that the two cars hooked together and were subsequently left stranded on the infield as Lack charged to the chequer ahead of Dean and Kris Jennings.

The first attempt to get heat three underway resulted in the two front row starters in Anthony Lambert and Mark Pholi executing a synchronised slew onto the infield, bringing about a restart with Lambert relegated to the second row and Pholi at the back of the pack. Cody Maroske took full advantage of his elevation to pole position, leading all the way to finish ahead of Gowland and Corbet.

Lambert bounced back in heat four to win from Kratzmann and Kristy Bonsey, with Kris Jennings withstanding the best efforts of Scheuerle and Ben Hilder, to win heat five.

Refusing to concede his track championship crown without a fight, Oldfield chased down Brad Ayers to win the final heat, leaving Ayers second ahead of Scott Genrich.

As top qualifier, Craig was one of several drivers to make their first appearance in the Dash and it was another of those in Britten who emerged with pole position from the pre-race grid draw. Drawing on the wealth of experience he has accumulated as a three-time Australian Dirt Modified champion, Britten led the 6-lap sprint from go to whoa, leading Morgan, Corbet, Lack, Mann, Tulloch and Murray home, while Craig’s great night took a decidedly downward turn when he whacked the wall in turn two on the opening lap and tipped over, never to be seen again.

The B Main carried more weight than usual with both Hilder and Gee amongst the starters in their fight for third overall in the championship. It was another driver with plenty at stake who emerged victorious though with Gowland leading home Pholi, Lambert, Gee and Bonsey, all of whom advanced to the back of the feature race grid. Nathan McFarlane was looking strong and charging hard with a transfer berth in his sights until he wiped out in turn two with just three laps to run.

With Hilder also granted a start in the main event, 19 cars gridded for the final feature race of the 2017/2018 Archerfield Sprintcar season with the unlikely front row pairing of Britten and Morgan to lead the field away. The first attempted start only made it to turn two before Tulloch made an unceremonious exit when he climbed the concrete. The next start was even shorter lived as a result of Mann tipping over in turn one to bring his run of podium results to an end. Once underway, Morgan shot to the front in a preview of what we can expect from him in coming seasons, only to leave himself lamenting what might have been when he tagged the turn four wall and tripped over on lap five. Having moved ahead of Britten on lap two, Lack would lead the field away at the restart, with Oldfield having already advanced from 10th to be sitting third. Oldfield wasted little time in disposing of Britten to grab second spot and then chased down Lack on lap 13 to assume the lead. Having distanced himself from his pursuers, Oldfield looked on track to score yet another feature race win until he tangled with Pholi in turn four with five laps remaining to bring his championship defence to an end. With Oldfield out, Lack found himself back in front again and made easy work of the final four laps to end on otherwise ordinary season on a high. Scheuerle climbed from 11th to clinch the championship courtesy of a runner-up result, while Gee was spectacular in his surge into third after starting from the back row. Dean was another to enjoy a reversal of fortunes with a strong run into fourth ahead of Britten, Kratzmann, Murray and Bonsey, who also made inroads from deep in the field. Hilder and Ayers rounded out the top ten, followed by Gowland, Jennings and Corbet.

In its first appearance on track, the Ian Boettcher Race Parts entry being piloted by Darren Vine was a class above the field in Midget time trials. Vine was the only driver to run under 16 seconds (15.572), half a second quicker than his nearest rivals in Brad Young and Anthony Chaffey, with fourth-fastest George more than a second adrift of Vine’s effort.

Rusty Whittaker romped home to win the opening heat over Whatmore and Vine, with Mitchell Rooke downing Farmer and Chaffey to two.

Heat three saw Clarke prevail over Vine and Whatmore, with George snaring the final heat of the season ahead of Farmer and Tim Farrell.

In the feature race, Darren Vine was a cut above the rest and had carved out a sizeable advantage before inexplicably spinning to a halt in turn three with just three laps to run. Clarke took maximum advantage of the good fortune bestowed upon him to score his first Archerfield feature win, leading George, Whatmore, Chaffey and Farrell to the chequer, with Vine languishing in ninth behind Robert Mazzer, Brad Young and Brad Dawson, with Brrie Valentino the only other to go the distance. Having already wrapped up the Polar Ice Championship, Farmer endured a disappointing end to an otherwise stellar season, heading infield on lap five where he would be joined by the outgoing champ in Whittaker, along with Audie Malt and Riki Harrison.

It was business as usual in the Formula 500 ranks as Williams again went through the program undefeated, taking out the feature race ahead of Kennedy, Brown, Kurt Wilson and Tomas Partington to add another feature race success and a series win to his already significant list of accomplishments. Bryn Upshall snared sixth in front of Phil Roberts, Ryan McNamara and the most recent Junior graduate in Tarhlea Apelt, with Brady Argles, Vicki Canfield, Luke Edwards and Tony Bailey completing the finishers.

Kennedy claimed the opening heat in advance of McNamara and Partington, with Williams besting Brown and Roberts in the second preliminary.

Wilson led early in heat three before being rounded up by Williams, with Tristan Johnson bouncing back from a roll in his opening heat to finish third.

Partington powered home to take the final heat and secure a front row start in the feature, leading Upshall and Apelt to the flag.

In his first ever appearance in the Compact Speedcar ranks, Bodie Smith almost conjured himself a miracle win after chasing down Tim Farrell and relieving him of the lead. However, when Smith’s car stuttered out of turn four with just two laps to run, Farrell pounced to regain the top spot. Stothard finished second ahead of Stewart, with Wayne Corbett awarded fourth despite finishing upside down after riding a wheel in the scramble to avoid the the stricken Smith.

Heat winners were Farrell, Stewart and Dave Swan, with Smith making an instant impact in a highly impressive step up from the Junior Formula 500 ranks.