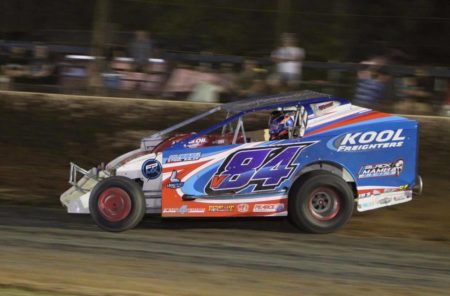 On December 28 for the Christmas Cup, Rose, from Grafton, put in an outstanding drive throughout the 25-lap feature race for the V8 Dirt Modifieds and went on to defeat current and five-time Australian Champion Kevin Britten, from Brisbane in Queensland, in second and first-time visitor to Grafton Speedway from Victoria Todd Hobson in third. The top-five finishers were completed by another locals Andrew Firth and Christopher Polsen.

A few nights later with the running of the New Year’s Spectacular on January 2, the V8 Dirt Modifieds returned to headline the action. On this occasion, Hobson came out on top in the rain-shortened feature race in impressive fashion ahead of Polsen and V8 Dirt Modified newcomer Jay Davey in second and third place respectively. For the second race meeting in a row, Firth narrowly missed out on a podium finish in fourth, while Mark Griffith came home in fifth.

Sydneysider Zac Pacchiarotta made the long drive up to Grafton Speedway worthwhile, after he came away with the Wingless Sprint feature-race spoils on January 2. Last-start Grafton Speedway feature-race winner Brock Gardiner finished in second and Trent Martin rounded out the podium finishers in third.

Over the two nights of action at Grafton Speedway, the AMCA Nationals were on the program, and it saw the feature-race wins go the way of Paul Reeves. On December 28, he downed Brett Robotham and Graeme Holland, while on January 2, he outpaced Lukey Watt and Peter Markulin to the chequered flag.

Another support class over both nights were the RSA Street Stockers. In what were the final race meetings prior to the staging of next month’s Australian Title, the RSA Street Stockers came out in large numbers. On December 28, Mark Eveleigh defeated Brendan Wakeman and Steve Hall in the feature race, while on January 2, the feature-race honours were claimed by Luke Grey ahead of Jamie Smith in second and Wayne Arthur in third.

One of the highlights to come out of the December 28 race meeting was the surprise appearance of 410 Sprintcar racer Jai Stephenson. The Grafton local had a shakedown run of his NSW # 45 Sprintcar around the Grafton Speedway track prior to his busy racing schedule in Queensland, and it was certainly well received by the large crowd at hand.

The next race meeting on the Grafton Speedway calendar is going to be on the Saturday night of February 13 with the headlining act being the 2021 Australian RSA Street Stockers Title. The support classes are going to include V8 Dirt Modifieds, Wingless Sprints, Production Sedans, Modlites and RSA Four Cylinder Sedans.

Grafton Speedway would like to thank Hession’s Auto Parts for their support throughout the 2020-21 season. Based in Grafton, along with their nearby Coffs Harbour, Hession’s Auto Parts stock a wide range of parts and accessories at competitive prices. To find out more, contact them on 0266 423 085 (Grafton) and 0256 456 361 (Coffs Harbour) or visit their website at www.hessionsautoparts.com.au.