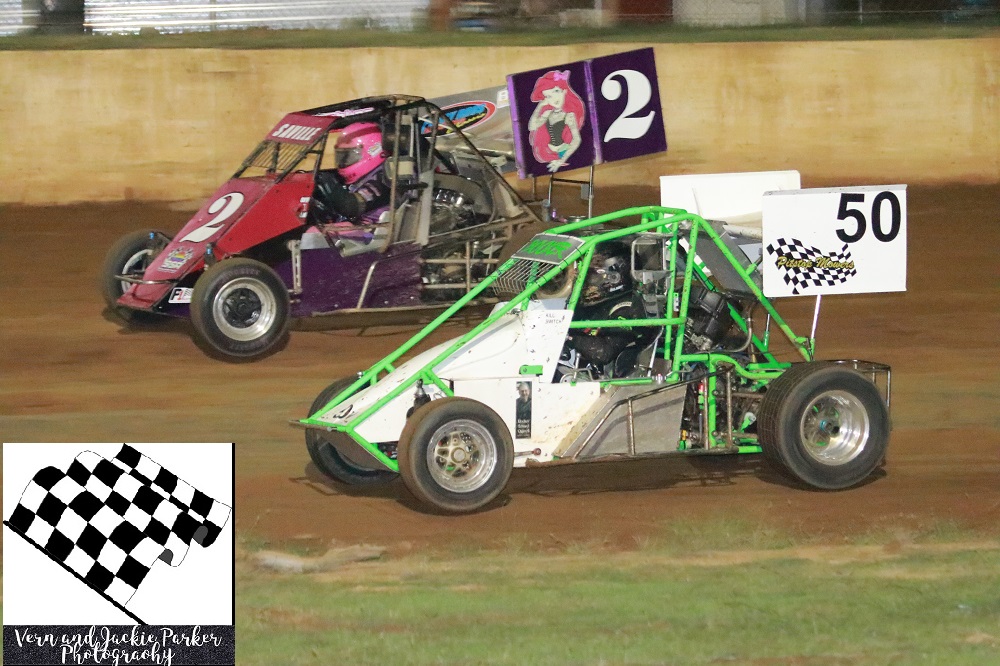 This Saturday night at Wahgunyah Speedway the 2021/22 season Australian Grand Prix Midget title will be run and won with a healthy field of seventeen competitors set to do battle and sort out a truly deserving champion who will carry the number one on their rear wing for the next twelve months.

With all sorts of set backs having intervened with the title being held at the New South GP Midget Clubs race venues Goulburn and Nowra Speedways in New South Wales, the New South and our Victorian club pooled their resources and for the benefit of the class, the result being a title was arranged at the closest Victorian track to a New South Wales border, just a hop, skip and jump over the bridge from Corowa into Wahgunyah.

This weekend’s race program is scheduled to start from 3pm at the very large 600 metre plus long and super-fast race track that will provide for terrific entertainment for race fans keen on fast cars. On race day many of our race drivers will be in town early for race fans to come down into the pit enclosure before it closes to take a look at the team’s pocket rocket machines.

Support has been forthcoming after some terrific discussions from the good people within the New South Wales club. We are proud to share that Gulf Western Oils, Arjan Motors and White Ant Racing are the titles co-naming rights sponsors. This terrific support all contributes to what is a great little pool of cash up for grabs for our competitors.

Amongst the field will be dual Australian title winner Ash Booker who won the title back in 2012 and 2014 and Paul Perry who won the title in 2016. New South Wales and regular visitor to Victoria is competitor Janelle Saville. Janelle is the daughter of two times champion Rod Saville and sister to brother Scott who also won the title once. Also in the line-up is Alex Myers-Hudson who is the son of two times national champion Dennis Myers and will compete this weekend albeit with a fresh engine whilst Gary Bowyer the current New South Wales champion is also in the field.

Last start Victorian club feature race winner Shawn Ward is in the line-up after his victory at Nagambie Speedway, plus Terry Brown who has a new engine package and started to put down some seriously good laps at Nagambie before a tangle with the concrete, is all fixed up and ready to fire up this weekend.

Along with Saville and Gary Bowyer, the New South Wales contingent includes Adam Buckley, Anthony Lea, Wally Kermond, and Riley Bowyer. The Victorian Club welcome their friends from north of the border back again to Victorian territory.

The Victorian drivers also include Jack Ward, Daniel Meredith a rookie this season, Chris Fowler one of our front runners, Matt Kamolins, and Alex Gouveia another rookie who hales from the North East of Victoria where the title is being held.

The committee of the Victorian club wishes everybody the best of luck and thank Brendan Eames and his team at Wahgunyah for their support of the title event.