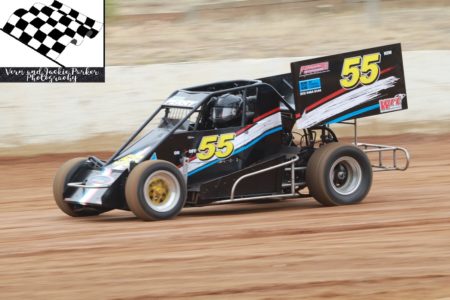 Eighteen cars arrived in the pit enclosure to compete with a healthy amount of New South Wales travellers and Victorians in NSW registered cars to mix it with the Victorian Club registered drivers.

Attempting to start the race Jack Ward (# 4 – Stinger – Suzuki GSX – Dosser Panels) spun the number four car around and whilst simultaneously Alex Myers attempting to make a move on the outside of Bennett hit the wall and damage to his car put him out of the race. David Bacon did not get to start. Rodriguez led lap one from Bowyer and Goss (# 33 PBR – Kawasaki Zx12 – GB Powder Coating). Things started to go awry for Rodriguez on lap eight and Bowyer moved to the lead and Rodriguez exited the race one lap later as Bowyer banked the win in the only race that went flag to flag for the whole night from Goss, Bennett, Saville, Kamolins and Ward.

Mark Blackeby (# 10 – Stinger – R1 Yamaha – Pitstop Mowers) began from pole position in the second heat of round one with Chris Fowler, Rod Saville, Shawn Ward, Terry Brown, Ash Booker, Travis Florrimell, Riley Bowyer and Mark Cecil all slated to hit the track. Florrimell (# 81 – Stinger – Suzuki 1000 – Stinger Chassis) and Riley Bowyer though did not make it through the track entry gate to start.

Booker (# V50 – HMJ – Yamaha R1 – R & P Grinding Service) lead from Rod Saville at the start with Cecil from the back row moving into third first time past the Stewards. On lap three Cecil moved into second with Booker leading him, Saville, Fowler and Shawn Ward (# 44 – Independent – Suzuki GSXR 1100 – Benalla Furniture). On lap four Ward left the track for the infield and a few laps later Cecil moved into the race lead. Cecil defeated Booker, Saville, Fowler, Brown and Blackeby.

On a first attempt to start Myers (# 11 – PBR – Suzuki GSXR 1100 – Automotive Super Balance) and Ward spun together, Riley Bowyer hit the wall and bounced off into the path of Fowler hitting the Victoria 13 car. Fowler’s (HMJ – Yamaha R1- Ballistic Performance Parts) car sustained a buckled wheel and flat front right tyre and tried to continue on the highline of the track, Myers and Ward re-joined the race at the rear. On the restart Jack Ward spun and on a subsequent restart collected the single file cone to be sent infield for being in two restarts already.

To conclude the second round Brown, Janelle Saville (# 2 – PBR – Kawasaki ZX12 – Highline Racewear)), Blackeby, Bacon, Rod Saville, Bennett, Cecil, and Rodriguez Yamaha R1 – Kyabram Batteries) (# 47 – PBR – were drawn to compete. Stewards aborted the first start due to a break in formation and at the restart Janelle Saville’s car came to a stop on the front straight after the rear end of her machine collapsed.

The race finally got underway and Cecil lead Rod Saville, Brown (# 88 – Stinger – Yamaha R1 – Mooroopna Mobile Engineering), Rodriguez and Blackeby, with Rodriguez moving to second on lap two. On lap three both Bacon and Rodriguez moved infield with engine issues and Rod Saville moved back to second spot. During the race Cecil set the fastest one lap time of the evening when he scorched around in 15.773 seconds Cecil took the win from Rod Saville as both drivers lapped third placed Blackeby, Brown in fourth and Bennett in fifth.

The green flag dropped and Rodriguez in the minds of stewards was considered to have jumped the start and instead of pulling the race back the decision was made to penalise him at the end of the race two spots or on the first caution. At the end of lap two Myers lead Rodriguez, Booker Bennett and Brown with a caution falling for the stricken Gary Bowyer whose car came to a stop on the back straight.

In the single file restart Rodriguez was deemed to have passed Bennett before the cone and the stewards pulled up the race to send him rear of field, Brown exited the race before the ensuing restart after tearing the spline out of the rear wheels.

The stewards let the race go again and once more Rodriguez was deemed to have infringed and was this time given the black flag to go and park infield. Stewards furiously gestated to Rodriguez to go infield displaying the black flag.

Eventually the steward pulled the yellows and after Rodriguez refused to go infield under racing conditions and was told to put his car on the trailer after he remonstrated his anger with a doughnut on the infield and was handed a fine and suspension to go with it. Racing got back underway and Jack Ward soon exited after damage to his Clutch and his night was over. Eventually a race ensued, and Booker beat Myers, Gary Bowyer and Bennett.

The final qualifier before the big race put Shawn Ward from pole with Kamolins, Rod Saville, Goss, Fowler, Cecil and Blackeby after a near fifteen-minute marathon the race before. Blackeby spun on the first attempt to start and Fowler’s car came to a halt due to a broken wire on the fuel relay which saw his night end as they chased the issue.

Saville took off with Ward in pursuit, Goss, Cecil and Kamolins. Ward, Cecil, and Goss moved positions over the next couple of laps before Kamolins spun on lap eight and left the track a lap later. Saville took the win from Cecil, Goss, Ward, and Blackeby.

The green dropped and a dozen cars made it the four turns around with Bennett the only to park infield without one lap to his name. Cecil was in front of Booker and Rod Saville whilst on lap two down the back straight Riley Bowyer’s shocking night of bad luck continued as he came to a stop once more.

On lap six Rod Saville (# 1 – PBR – Kawasaki ZX10 -WRT Wings) passed Booker who had broken a brake line, into second and on lap eight Blackeby pulled infield and out of the race. Next was a spin to Kamolins on lap nine before the race really settled. Shawn Ward, Gary Bowyer and Janelle Saville swapped places around in fourth to sixth for part of the race before Ward and Gary Bowyer dropped behind Myers. At the twenty-lap mark Cecil (# 55 – PBR – Suzuki 1000 – Perry Bros Racing) flew past the flagman for an Australian title victory with a gallant Rod Saville in second then Booker, Janelle Saville, Myers, Ward, Gary Bowyer, Kamolins and Brown.

At the presentation Mark Cecil accepted his trophy from long-time friend and sponsor of the 2021 Australian GP Midget Title, Dennis Myers from Automotive Super Balance who congratulated him with a huge gorilla cuddle. Cecil thanked car owner Trevor Perry for offering him the drive spruiking what an awesome car the crew had given him. He also thanked Rushworth Speedway and the VGPMRA for hosting the event.