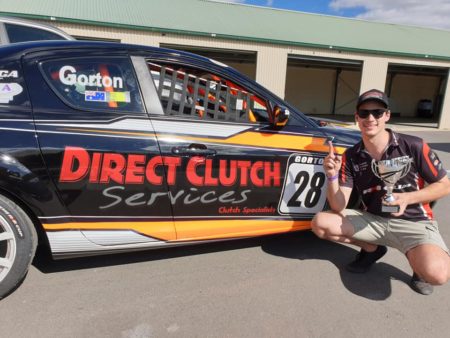 “I had hoped to be towards the front of the field, but to wrap up the championship in my first year, I couldn’t be happier” said Gorton. “Pre-season testing showed we had the pace, but it was a matter of honing my racecraft throughout the season”.

While the National series calendar was impacted by Covid-19, the RX8 Cup committee pushed forward hosting 4 championship rounds, two at Sydney Motorsport Park and two at Wakefield Park Raceway. There were discussions regarding awarding a National series championship podium in a year which was affected by border closures, but ultimately management decided to award the Top 3, with a presentation set to be held at Round 1 of 2021.

With 35 competitors scoring points across the season, it came down to the final round at Wakefield Park Raceway to decide a winner between Gorton and Barnes.

Gorton put his best foot forward in qualifying, earning pole with a blistering 1:08.73, less than 1 hundredth ahead of former F3 and Dick Johnson Racing Fujitsu driver, Marcus La Delle, who leased a car through S-Sport Racing for his return to motor racing.

From there, Gorton managed a 1st in Race 1, 2nd in Race 2, and 1st in Race 3, which was enough to edge out Barnes in the championship standings by 42 points.

“I’m stoked to secure the championship in what was a tough year. While I originally only planned to compete in one season, I am eager to defend my title in 2021 in what is set to be an even bigger year, before moving onto something else. I’d love to build an Improved Production car; I love the diverse range of cars and ability to put some of my engineering knowledge to good use” Gorton said.

“I’d like to put out a big thank you to my parents, who maintain the car and transport it for me. All I have to do is set it up and drive, which makes my job easier. I’ve also got to thank my friends and sponsors who have supported me all year; Drew at Direct Clutch Services, Grant at Grafton Auto Electrics, Garry and Todd at Cleavers Mechanical Repairs, Matt at Autosmart Mid North Coast, and Dan at Clarence Valley Tyre Centre” Gorton concluded.

The RX8 Cup Series returns to the track February 26-28th at Wakefield Park Raceway for Round 1 of the 2021 series, proudly supported by major sponsor OccSafe Australia.