Gordon Murray honoured for the greatest car of the 20th century

Gordon Murray honoured for the greatest car of the 20th century 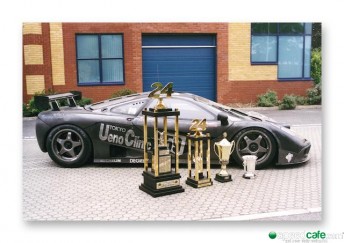 MEDIA RELEASE: A unique display to be unveiled at the London Classic Car Show on February 18, 2016 will celebrate the McLaren F1 and its creator, Professor Gordon Murray.

Murray built and raced his first home-built car (IGM Ford) in Durban in the late 1960’s and as a youngster he developed a passion for fast cars through the influence of his motor mechanic father and in 1969 his dreams led him to England.

Murray designed a series of new Brabham F1 racing cars and over the next 15 years won 22 grand prix wins enabling Nelson Piquet to win the world championship in 1981 and 1983.

In 1986, he joined McLaren International as Technical Director and two years later his Honda powered McLaren won 15 out of the 16 grand prix races and gave Ayrton Senna his first driver’s championship.

From 1991 – 2004, Murray headed McLaren Cars to design the Company’s first project, the McLaren F1 Road Car and a racing version that won two world sports car championships and the Le Mans 24-hour race on its first attempt in 1995.

In what’s clearly going to be a very special honour to the F1 – thus something no car enthusiast will want to miss.

As well as Murray himself, the showcase will feature a number of F1-related artefacts including the race suit worn by JJ Lehto when he won the 1995 Le Mans 24 Hours in an F1, the road car’s bespoke luggage, technical drawings, a BMW engine block, one of the TAG Heuer watches given to each owner and engraved with their car’s build number and an example of the car’s bespoke tool kit, made from gold-plated titanium no less.

“When we started work on the F1 we benchmarked all the existing supercars from Ferrari, Lamborghini, Porsche and so on, as well as aspects of cars as varied as the contemporary Honda NSX and the 1960s Lotus Elan.

“The idea was to better the performance, vehicle dynamics, handling and ride comfort, whilst producing a car that could, genuinely, be used every day.

“We achieved it all… except perhaps the steering. The F1 gets very close but doesn’t quite better the purity of the Lotus Elan’s steering,” said Murray.

Murray set-up his own company, Gordon Murray Design Limited, in 2007 to develop an innovative and disruptive automotive manufacturing technology trademarked iStream® – a complete rethink and redesign of the traditional manufacturing process that promises to revolutionise the future of automotive production and the impact that personal transportation has on the environment.

In 2014 Murray was honoured with the John Bolster Award at the Autosport Awards for Technical Achievement, 40 years after his first grand prix victory.

Murray said: “For me personally, I’ve always enjoyed a challenge and in particular the problem solving that follows.

“My current challenge is to bring Formula One technology to the everyday motorist, helping to solve some of the issues we face around mobility, energy resources and the environment. iStream® is designed to replace capital and energy intensive stamped steel car construction. iStream® also adds safety and reduces weight – innovation meets commercialism”.

To keep up-to-date with all the news from the London Classic Car Show visit the dedicated website – www.thelondonclassiccarshow.co.uk.