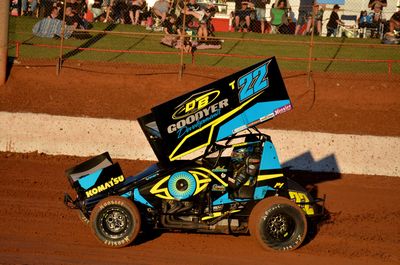 Round two of the East Coast Logistics Sprintcar Track Championship at Archerfield Speedway on Saturday night (October 16) dished up another dazzling display with a feature race that, in many ways, followed a similar trajectory to the championship opener two weeks earlier. However, on this occasion it was Tasmania’s Jock Goodyer who emerged victorious after spending much of the race in third spot. On a track that once again presented a fastest lane up against the fence, Goodyer chased down Luke Oldfield and Lachlan McHugh to score his second feature race success in as many weeks. Both Oldfield and McHugh enjoyed stints at the front, but neither had anything to counter Goodyer when he pounced in the wake of the only restart on lap 15. Having immediately relegated Oldfield upon the resumption of racing, Goodyer rounded up McHugh on lap 20 to take control of the race. A strong finish from Brent Kratzmann carried him to fourth at the finish, with Aaron Kelly finishing fifth ahead of Ryan Newton, who had earlier upstaged all the big guns to qualify on pole position.

Of the 27 Sprintcars that fronted for ECL track championship competition, only 26 hit the track for time trial qualifying with engine dramas denying Jy Corbet a chance to take on the clock. As the first car on track, Newton stopped the timer at 12.119, which was immediately bettered by Butler (12.085) and then Kelly (11.834) on consecutive runs before Goodyer posted a best lap of 11.777 that remained the benchmark and secured KRE Fast Time. Lapping late in the session, Kratzmann (11.814) would snatch second overall from Kelly, with McHugh (11.862) next best ahead of Bryan Mann (11.995), Darren Jensen (12.035) and Oldfield (12.061), with Ryan McNamara also moving ahead of Butler and Newton.

Promoted to pole position when Andrew Baumber was deemed to have infringed on the first attempted start, Paul Rooks took maximum advantage of his good fortune to lead all the way, finishing in front of Kevin Titman and Oldfield.

McHugh muscled his way to victory in heat three, surging to the front to finish in advance of Kristy Bonsey and Tim Farrell.

When heat three was halted with just two laps remaining as a result of spin from Andrew Corbet immediately after being deposed from the lead by Newton, there seemed an expectation that second-placed McHugh would quickly assume control. However, Newton had other ideas and drove away from McHugh to score his first ever Sprintcar race win, with Jensen home third.

After climbing the concrete during qualifying and subsequently only completing one of his timed laps, Mitch Gowland bounced back strongly to win heat five from McNamara and Goodyer.

A second heat win from Morgan in the final preliminary secured him direct passage into the feature, with Kelly and Brad Ayers filling the minors on this occasion.

When top qualifier McHugh selected a six-car inversion for the Spanloc Dash, young Newton found himself on pole position with the ominous presence of Oldfield alongside. The first start was abandoned following a spin from McHugh in two from which he emerged unscathed, although the same couldn’t be said for Kelly, whose absence of a functioning front end rendered him a spectator. Once the race got underway, Newton was seemingly unfazed by the occasion and set the pace from the outset to finish 1.5 seconds clear of Oldfield, with McHugh and McNamara next best. It certainly came as no surprise when Newton opted not to take the BK Trading Challenge and surrender his career-first feature race pole start.

Tim Farrell looked comfortable for most of the B Main until Vardy, as he did at the previous round, found his best form late in the night and surged into second spot, narrowing the margin with each circulation but ultimately running out of laps to deny Farrell. The final direct transfer spots into the main event went to Hoffmans and Andrew Corbet, although Gowland would also be granted a start. Amongst those who missed the cut were Kevin Britten, who performed so strongly to secure a top-five result in the opening round.

Pouncing from the outside front row, Oldfield led the opening lap of the feature race from Newton, McHugh and Kelly, who got a terrific start to jump four spots. McHugh moved ahead of Newton on lap five, with Kelly and Goodyer doing likewise soon after. With lapped cars becoming a factor very early, Oldfield found himself baulked by Rooks along the back straight on lap 10, enabling McHugh to close in and snatch the lead, with Goodyer having already relegated Kelly to be running third. Rooks would again play a significant role in the result when he tipped over in turn two on lap 15 to trigger the only restart of the race. Immediately upon resumption of hostilities, Goodyer pounced to grab second spot from Oldfield and, within five more laps, had surged to the front. Despite lapped traffic proving particularly petulant and requiring Goodyer to tread carefully in negotiating the tailenders, McHugh was unable to offer up any sustained pressure in his bid to avoid a third runner-up result in as many outings. With Oldfield untroubled in third, there was movement further back as Kratzmann climbed ahead of both Kelly and Newton to secure fourth. Having endured a chassis-bending crash at the previous round, Jensen bounced back with a solid run into seventh, with McNamara, Maroske and Morgan rounding out the top ten. An uncharacteristically off-the-pace Mann was the final runner on the lead lap, leaving Farrell, Corbet, Hoffmans, Vardy, Gowland and Butler to complete the field, with Rooks and Titman, who exited on lap five, the only non-finishers.

A spin from Brad Keiler in turn three on the opening lap of heat two triggered a skirmish that proved costly for some, with a luckless Erin Vanderreyden coming to rest atop the concrete wall. Bottin and Nicholas O’Keefe were also forced out with flat tyres, leaving Gaudry in control of a depleted field to lead home James Matthews and Libby Ellis.

Gaudry followed up with an all-the-way win in the final, denying Moes in his bid for consecutive successes. Ellis clung to third spot despite a very strong finish from Vanderreyden, with Bottin next best. Having been involved in a tangle on lap nine that would force category debutante Harry Stewart to the infield, Matthews and O’Keefe were able to continue and complete the finishers.

Following heat wins to Steve Price, Michael Denning, Nathan Tomkins and Bruce Marshall, it was the latter who started the 20-lap Shock Absorber Therapy AMCA Nationals feature race from pole position. Price got the initial jump from the outside front row, but Marshall quickly asserted his authority and was in the lead before the completion of the opening lap. When Price exited the fight on lap five, Steve Potts took on the responsibility of challenging Marshall, only for contact between the pair along the back straight leaving Potts with a flat tyre and out of action. Now it was time for Tomkins to step up and he answered the call with gusto, using the high side of the track to charge around Marshall and grab the lead on lap 14. However, Marshall fought back to reclaim the top spot on the next lap and held firm to grab an early lead in the track championship. Former national champ Shane McKinnell finished third ahead of Kevin Stow, Troy Price, Brett Robotham, Robert Turner and category newcomer Maverick Dack, with Denning and Leonie Knight completing the top ten.

Tyson Snow, Kyle Honour, Sam Gollschewsky and Callum Beerling shared the heat race spoils in Modlite action, but come feature race time it was Mitch Pammenter who proved too pacey. In a race shortened to 15-laps in the wake of a series of restarts, Honour led the early going from pole position before Pammenter, who started on the fourth row, pounced after one such interruption. Honour remained second to the chequer, with Mason Pammenter advancing from ninth to finish third. Luke Harrison and Chris Fing filled out the first five, while Gavin Thomas, Julian Olley and Donika Gower were the only others to go the distance. Despite a heat win, a failure to finish his other heat left Australian champ Sam Gollschewsky starting 12th in the feature and, whilst he had advanced several spots early, his race ended when he was unable to avoid a spinning Olley along the main straight on lap three.

The Compact Speedcar feature race proved an effortless stroll for Bodie Smith, finishing more than three seconds clear of Matt O’Neill, with Andrew Parkes placed third. A late-race pass from Steve Swingler elevated him in to fourth over Dion Wilson in what was a race otherwise devoid of action. Chris Serle-Thrussell, Tim Devine, Dave Collins, Richard Treanor and Andrew Rooke were the remaining finishers.

On a freshly watered track, Ricky Price was the only driver in the field to utilise the small cushion of dry dirt against the fence in the opening heat of combined B Grade/Limited Sedans. As a result, Price finished more than 14 seconds clear of his nearest rival and lapped over half the field, including eventual feature winner Ben Harris. Gorman prevailed in the second heat and the opening laps of the feature delivered exactly what was hoped in bringing the two classes together with Gorman, Harris and Mark Lowe running three-wide in their fight for the lead. When Lowe retired to the infield on lap five, Harris was able to skip clear of Gorman to grab the win. Next best was Aaron Stone, followed by Haiden Grantz, Mark Anderson and Michael Laver.

Charlie Bowen and Bailey Leeson split the heat wins between them in Formula 500 Juniors, but with neither going the distance in the feature it was Chay Corbet who found himself a winner. When Sean Rae crashed out a lap from home to join Bowen, Leeson and Titman as non-finishers, Noah Ball became the only other driver to greet the chequer.

The next event at Archerfield Speedway is Saturday, October 30 featuring round three of the East Coast Logistics Sprintcar Track Championship and round two of the TFH Midget Series, along with Wingless Sprints, Formula 500s, Lightning Sprints and Formula 500 Juniors.