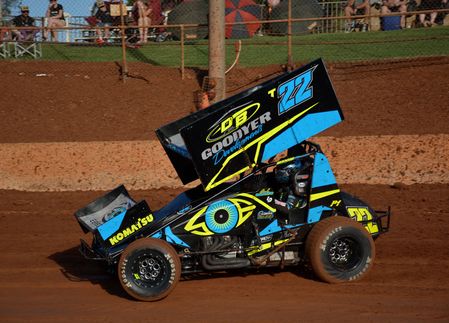 In a dominant display that saw him become only the fourth driver to win a Sprintcar feature race at Archerfield Speedway this season, Tasmanian teenager Jock Goodyer stormed to victory in round seven of the East Coast Logistics Track Championship on Saturday night (February 6). Having twice finished on the podium in recent Archerfield appearances, Goodyer went straight to the front on this occasion and was never threatened, despite a series of restarts that kept offering up opportunities for his pursuers, none of whom were able to use the interruptions to their advantage. Cody Maroske recovered from a heat race crash to finish in second spot, with Randy Morgan scoring his best result of the season in third place ahead of Allan Woods and Dylan Menz.

A field of 33 cars from three states hit the track for Sprintcar time trial qualifying and, as the first driver to race the clock, Luke Oldfield set a benchmark time of 12.414 that would ultimately prove beyond everybody who followed. Aaron Kelly came very close with a 12.482 best effort to be second quickest, with Goodyer (12.533) and Maroske (12.606) next best ahead of Dan Murray (12.665), Morgan (12.713) and Callum Walker (12.790). Kristy Bonsey, Dave Fanning and Adam Butler completed the top ten ahead of championship leader Lachlan McHugh, while Ben Hilder made a solid start to his first meeting of the season to be next best.

Whilst the feature race may not have reached the heights of recent outings, the heat racing throughout the night was superb on a track that offered plenty of pace despite the hot conditions.

The first of the preliminaries saw Andrew Corbet home first ahead of Oldfield, who surged from fourth row, with Mitch Gowland grabbing third. The first of a series of incidents for Ryan McNamara came on lap five when he spun in turn four, only to find himself with nowhere to go when Brendon Claridge tipped over in turn one just a lap into the restart, putting both cars on the infield.

McHugh advanced from position five to win heat two, chasing down Menz to assume the lead on lap six. Menz remained second at the flag, with Lachlan Caunt snaring third.

Sam Bylsma looked on track to score his maiden win in the third heat until his lack of experience dealing with lapped traffic proved his undoing. Having rounded up the rest of the field to be sitting second, Goodyer pounced when Bylsma rode over the right rear of Libby Ellis through turn two. To his considerable credit, Bylsma maintained his composure to salvage second in advance of Woods.

Menz led throughout heat four from the outside front row, no doubt oblivious to the thrilling finish that unfolded behind him. Into turn three on the final lap, McHugh charged under Corbet to snatch second, only for Corbet to surge back through the final turn and win the sprint to the chequer by a mere 0.024. McNamara, meanwhile, was out of luck again with another spin in turn four that confined him to a rearward start in the B Main.

More action unfolded in heat five with an incident on lap three putting Walker out of action and leaving Bonsey to continue with a damaged front wing, while further stoppages would ensue as a result of Taylor Prosser and Jai Stephenson failing to negotiate turn four in separate incidents on consecutive laps. Goodyer would take full advantage of the interruptions to chase down Jessie Attard and grab a win, with Darren Jensen home in third spot.

A turn two kerfuffle on the opening lap of the final heat resulted in Maroske finishing upside down but able to continue with a crumpled top wing, while Jason King and Tim Farrell were not so lucky and exited proceedings. Once underway, Andrew Baumber held firm at the front from pole position to take the race, with Woods inheriting second spot when Fanning exited after contact with an infield marker saw his left front wheel ripped asunder. Morgan finished in third spot to secure his place in the pole shootout.

Chaos reigned from the opening moments of the B Main with Baumber and Caunt both finding themselves upside down in turn four on the opening lap in an incident that put both cars out, along with those of Prosser, Gowland and Zac Howell, while Blysma would continue with a damaged wing. A spin from Brad Ayers on lap four would trigger the next wild moment as the ensuing restart would see contact between Farrell and Attard that would send the latter somersaulting through turn one to be collected by the hapless McNamara, who had already made considerable progress from the back of the field, with Jai Stephenson also tipping over and out of action. When Blysma grassed the #22 on lap five, just nine of 19 starters remained with 10 laps still to run. Out front, Jensen was untroubled in leading Hilder home, with Farrell and Fanning securing the final transfer spots into the feature.

The opening bronze round of the pole shootout saw Morgan top the timesheets to advance into the silver showdown, with Maroske also continuing as Murray and Bonsey bowed out.

The second round produced an identical outcome with Morgan and Maroske again advancing, this time at the expense of Kelly and McHugh, to set up a showdown with Goodyer and Oldfield.

Just when it looked as though Morgan might do it again, Goodyer pounced to deny a clean sweep and secure pole position, pushing Morgan to the outside of the front row, with Maroske third quickest ahead of Oldfield.

From the moment the green flag flew to get the feature race underway, Goodyer shot to the front and never looked likely to lose. His task became somewhat easier on lap five when the battle for fourth between Oldfield and McHugh got physical and resulted in OIdfield flipping out through turn two. With McHugh ordered to the rear for the restart, Kelly now found himself fourth but the race was halted again almost immediately when Kratzmann stopped in turn one, forcing McHugh into a spin to avoid contact. When Hilder spun in turn four on lap 10, the ensuing restart was a scrappy affair that culminated in contact between McHugh and Ayers that put both cars on the infield. Five laps later, the yellows were on again with Murray and Bonsey parked in turn four in the immediate aftermath of a moment involving Woods and Kelly that saw the latter drop a couple of spots. Back underway for what would be the longest uninterrupted period of the race and Goodyer had no trouble distancing himself from the field, with Maroske equally secure in second spot ahead of Morgan and Woods. Another spin from Kratzmann with two laps remaining bunched the field for the final time, but the interruption proved no hindrance to Goodyear as he cruised home to defeat Maroske, Morgan, Woods, Menz and Kelly. Next best were Corbet, Butler, Jensen, Farrell and Walker who, to his considerable credit, was the only member of this midfield bunch who seemed interested in advancing his position, trying in vain to get the outside working on a track that had succumbed to the hot conditions.

As they have done all season, AMCA Nationals served up another display of intense competition and although Thomas Vickery proved a comfortable winner in the opening heat, the fight for the minor placings saw Brett Robotham edge out Matt Hardy and Steve Price, with less than half a second separating the trio at the chequer.

Steve Potts and Bruce Marshall resumed their rivalry in heat two, finishing in that order as early leader Scott Hitchcock lost touch and had to settle for third.

The opening lap of heat three saw Nathan Tomkins and Michael Denning run side-by-side before Tomkins emerged with the lead. As Denning found himself shuffled through the field, Nathan Durston would clinch second spot in advance of Hardy.

The final heat proved costly for Marshall when contact with Troy Price saw him banished to the rear, where he spent several laps snookered behind a wall of Staceys before eventually climbing back to fifth. Price would go on to take the race ahead of Mark Taylor and Graeme Holland.

Potts leapt from pole position to lead the field away in the Shock Absorber Therapy round five feature race and held the position until lap four when he seemed to step aside and invite Hardy to take up the front running, an offer that was gladly accepted. With Durston, Vickery, Marshall and two Prices snookered behind Robotham, the lead duo was able to skip clear of the field and focus on each other. Marshall muscled his way into third at one stage, only for a restart to negate the pass and hand the spot back to Robotham. As the laps wound down, Hardy kept Potts at bay to score his first win for the season, with Robotham surviving a series of challenges to somehow hold third despite the fact that several of his pursuers were consistently clocking quicker lap times. Steve Price would eventually fight his way into fourth ahead of Marshall, Durston and Vickery, with Tomkins, Denning and Graeme Holland rounding out the top ten.

Jason Dreaver was the early leader in heat two, only to find himself devoid of a left front wheel just five laps into the contest. David Jacobi took over the front running and would lead Greg Worling and Shane McDonald to the flag.

Worling downed Lester and Shane McDonald to win heat three before Josh Arthur, who finished a long way last in his opening heat, found himself out front for much of the final preliminary. However, Nathan McDonald had other ideas and rounded up Arthur to grab the win, with Dreaver bouncing back to grab third as a flat tyre forced Pammenter to the infield.

Worling led the field away from pole position and held sway at the front until a flat tyre intervened on lap five and sent him to the infield, handing the lead to Nathan McDonald, whose tenure at the front would be brief as Lester surged to the front a lap later. Clinging to his lead, Lester would fend off various challengers in what developed into an excellent race for the minor placings. Ultimately it was Shane McDonald who clinched second spot and, just when it looked as though both brothers would again feature on the podium, Pammenter pounced on the final lap to snatch third spot from Nathan McDonald as Darren Baldwin and Jake Hawkins completed the first five ahead of Chris Evans, whose pace in the early laps was sensational as he charged from the back of the 16-car field. Arthur, Alex Sweeney and Peter White rounded out the top ten.

Stu Jefferies scored his fourth Stockcar feature race win for the season when he easily accounted for Steve Bateman and Peter Hosking, with Maverick Dack outpacing Brad Summerville and Terry Russell to win the Ford vs Holden vs Sigma feature race.

Racing continues at Archerfield Speedway next Saturday night with round eight of the East Coast Logistics Sprintcar Track Championship and round seven of the TFH Midget Series, plus Wingless Sprints, Modlites, Lightning Sprints, Microsprints and Formula 500 Juniors.