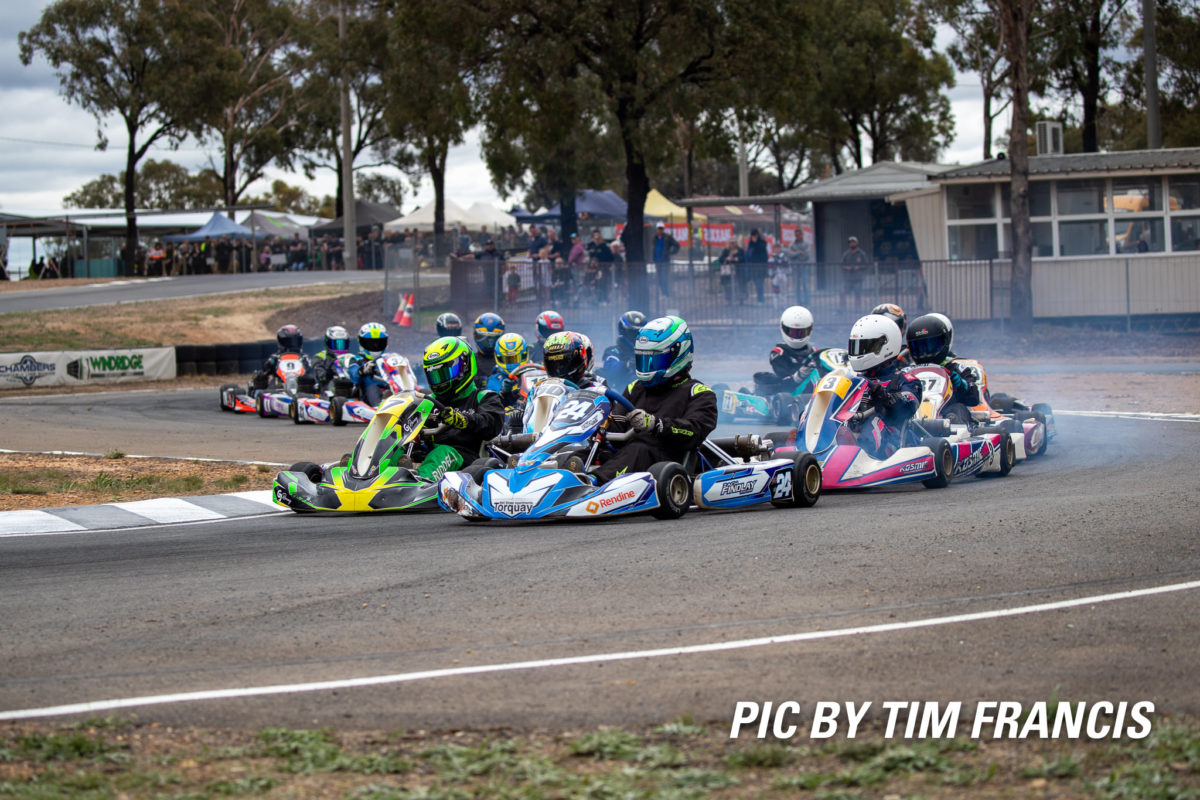 The Victorian Golden Power Series reignited over the weekend at the Bendigo Kart Club with over two hundred and thirty entries taken! Due to the on-going concerns over Covid 19 only two hundred and fifteen of the entrees could race, this however didn’t stop the high level of racing! With all qualifying and racing done under dry conditions, the excitement was at a sky high!

Jackson Brasher took his first-round win in the Golden Power Series in Cadet 9. Brasher had his work cut out for him with Archie Bristow and Sam Sidwell fighting at the front with him. After no race wins on Saturday, Brasher was able to come through and take heat three. Jackson was able to break away in the final and take a convincing victory over Bristow and Sidwell in third. Jensen Damaschino came home in position four with Jordan Bantick rounding out the top five!

Aiden Schweikert took his maiden Golden Power Series round win in the ultra-competitive Cadet 12 class. Aiden took his first pole position at the series on Saturday, before Anashe Manyau and round one winner Jack Jenkins shared the heat wins. In one of the finals of the day Riley Harrison took the lead in the early stages battling with Manyau, Jenins, Max Mangano, Schweikert and a recovering Jai George. In the final few laps, it was left to Jenkins and Schweikert to battle for victory with the latter taking victory in dramatic fashion! Jenkins came home in second position over Mangano in third. George made his way up to position four, with Manyau rounding out the top five!

KA4 Junior Light was an intense final with Pip Casabene, James Anagnostiadis, Samuel March and William Thompson all battling at the front for victory. Casabene had been the class of the field all weekend taking out pole position and all the heat wins. Anagnostiadis took the lead in the early stages and was looking extremely tough to beat. Thompson and Casabene made contact in the middle of the race, leaving March the only challenger for victory. Anagtostiadis came home with the victory over March and Thompson who didn’t set a lap in qualifying rounding out your top three. Joanne Ciconte and James Snaith came home inside the top five!

Benjamin Classon was another driver to take his maiden Golden Power Series Round win! Zach Findlay in last lap attempt put his entry on pole position over Grace Riddell and Classon. Riddell won the opening two heats, taking it to six consecutive victories in the series until Findlay broke that streak in heat three. The final was blown wide open with race leader Findlay pulled off the circuit leaving Riddell, Jackson Stone and Classon to battle. Classon made his way to the front and opened up a race winning margin to take victory over Riddell! Stone rounded out the top three with Isabel Rowe and Hugo Garraway completing your top five!

Harry Arnett took victory on his home deck in the ultra-competitive KA3 Junior class Pip Casabene took pole position and then shared heat wins with Arnett setting up for a mouth-watering final. Both drivers had turns leading the race in the final. Arnett was able to hold his nerve in the final and take victory over a fast finishing Casabene. Aris Kyriakou moved his way forward to land on the podium in third. Amos Orr just missed the top three in position four, with Jasper Frith rounding out your top five!

Blake Worboys came away with second spot at the opening round of the series but there was no stopping him taking victory over the weekend in round 2! Aiva Anagnostiadis took pole position but once racing started Worboys had a clean sweep, taking all three heats and the final. This left Nicholas Trebilcock, Toby Callow and Zachary Thompson to battle over the final podium spots after Anagnostiadis was involved in a first corner incident. Callow was able to come home with second position and Thompson just behind him in third. Trebilcock was just outside the top three in third with Andrew Riddell rounding out your top five!

Victorian State Champion Taine Venables put himself in a dominate championship position by taking out a clean sweep over the weekend. Taine was challenged all weekend by round one winner Braden Clark. Clark dropped out on the opening lap of the final leaving Ethan Briggs and Jarrod Bottomley battling for second spot. Briggs was able to come home in second spot over Lachlan Drysdale in third. Bottomley came home in position four with Kye Belton rounding out your top five for the round.

Gerry Westerveld continued his strangle hold on the TAG 125 Restricted Light class, taking a second consecutive round win. Ethan Warren took pole position in qualifying but Rhys Kemp took both heat wins on Saturday with Brodie Doidge mixing it up with the top group as well! Westerveld couldn’t be stopped come Sunday, taking the final heat and the final in dominate fashion! Doidge had to settle for second spot ahead of Warren rounding out your top three. Kemp came home just off the podium in position four with Michael Flynn concluding your top five runners.

Clayton Groves was another driver to take back-to-back round wins in the Golden Power Series in TAG 125 Restricted Medium. Local driver John Reynolds took pole position in qualifying but Groves was able to take the next three heat wins. Jackson Rice after qualifying eighth really put Groves under pressure in the early stages of the final. Groves in the back end of the race was able to open up margin with Rice dropping out of contention with a leaking front tyre. Brendan Mcswain came home in second spot over earlier pole sitter Reynolds. Michael Powell and Jarred Robson rounded out the top five runners.

Brett Jenkin was leading the final of the opening round when he was involved in an incident and taken out of contention. There was no stopping Jenkins this weekend who went on to take a clean sweep in the TAG 125 Restricted Heavy class. Marc Tune took the fight to Jenkins in the early stages of the final making for an exciting start. Jenkins was able to drive away in the second half of the race and take victory over Tune. New South Wales State Champion Ryan Van Ree and Brent Opie battled for the final podium spot with Vane Ree getting the chocolates. Jacob Smith came home in position five rounding out your top five place getters.

Victorian State Champion Phil Smith added another Golden Power Series round win to his ever-growing resume. Smith took pole position but shared the heat wins with local driver Phillip Stradbrook. Both local drivers Stradbrook and Heath Jelbart were really taking the fight to Smith going into the final. Smith and Jelbart had a nail bitting final with both drivers having their chance to take victory. Smith held on in a thrilling finish over Jelbart and Stradbrook rounding out your podium. Mark Appleby came home just off the podium in position four, with New South Wales State Champion Herman Van Ree rounding out your top five!

Troy Alger took out his first open win in over two years in TAG 125 Light. Jamie Rowe took pole position in Saturday qualifying. Rowe shared the Saturday heat wins with Will Harper with Alger right in the mix and Liam Ford showing excellent pace but having no luck. In a chaotic start to the final Alger was able to get a break and had the field chasing. Ford, after starting out of position eight, made his way into second spot and was chasing down the race leader. In a nail bitting finish Alger was able to hold on over Ford and Rowe rounding out your podium. Harper came home in position four with Curt Sera rounding out your top five!

Thomas Hughes was another driver to take consecutive round wins, this time in TAG 125 Heavy. Hughes didn’t have it all his own way with Nikola Schmidt and Billy Westerveld taking the heat wins and Hughes out of fourth for the final. Hughes made a great start and was able to get to the front and not look back taking victory in the all important final. Westerveld came home in second position with Schmidt on the podium in position three. Ayrton Creagh came home just off the podium in position four and Aidan Solomon rounded out the top five in a close battle.

The Victorian Golden Power Series will reignite on the final weekend of may for the third round out of the Albury Wodonga Kart Club!