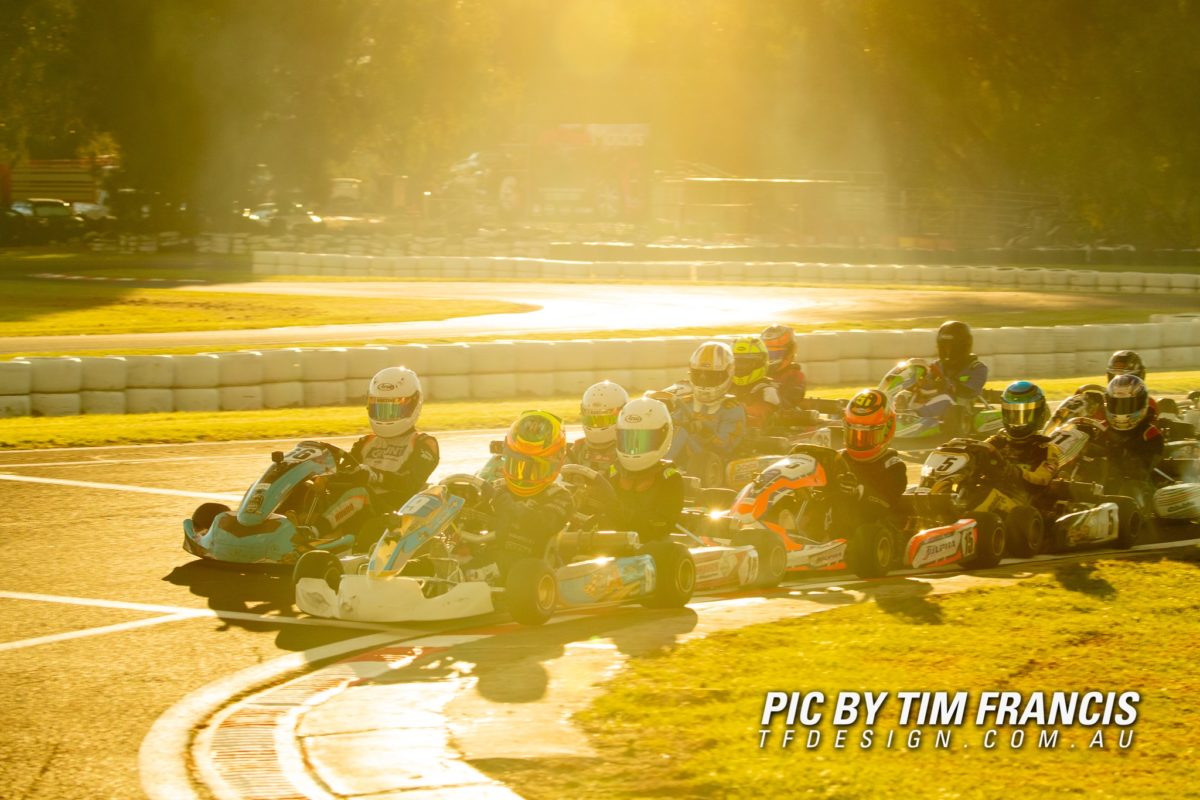 Albury Wodonga Kart Club had their first opening meeting since 2019 over the weekend for the third round of the Victorian Golden Power Series. With a massive two hundred and fifty-five karters entered, the racing was set to be thick and fast. With cold but dry weather across both days, The Golden Power Series put on another terrific show with many surprises across the weekend.

In Cadet 9 Jeremy Kay took out his maiden Golden Power Series pole position with Sebastain Tander, Archie Bristow and Jensen Damaschino. Kay and Tander and Damaschino all took out a heat win setting up for a fascinating final. Tander led the early stages with a six-kart train at the front of the field battling for position. Kay was able to take the lead in the middle stages and break away for his maiden Golden Power Series round win! Tander was able to hold on for second spot over Damaschino, Bristow and Koa Patten rounding out the top five.

In a near thirty kart Cadet 12 field, New South Wales driver Boston Gillanders took pole position over Lucas Costanzo, Jai George, Jack Jenkins and Cadet 9 graduate Jackson Brasher. George was able to take a strong heat one win in a battle with Gillanders with Jackson Brasher fighting through the field to take a win in heat two. George took another victory in heat three and broke away in the middle stages of the final. Gillanders made his way up to second and closed to the back of George in the final few laps. Jai was able to hold his nerve and take his first Golden Power Series round win as a Cadet 12 driver over Gillanders. Round one winner Jack Jenkins came home on the podium in third spot over Jackson Brasher and Lucas Rickard rounding out your top five.

Newly crowned Victorian State Champion James Anagnostiadis took pole position in the massive KA4 Junior Light field over Benjamin Munro and William Thompson. Anagnostiadis was able to convert pole position into heat one victory over Samuel March and Munro in third. Benjamin Munro was able to turn the tables in heat two and three and take back-to-back victories having the Pro Karting driver off pole position. Munro was able to break clear in the final and be the third different round winner in the class for the series! Munro came home ahead of Round two winner Anagnostiadis and round one winner Samuel March. Darcy Boulding came home in fourth spot with Pip Casabene rounding out your top five.

KA4 Junior Heavy continued the rivalry of championship leader Grace Riddell and former state champion Zach Findlay. Findlay was able to take pole position on his last flying lap in qualifying. Findlay took out heat one, Riddell took heat two and Findlay was able to take out the final heat with Hugo Garraway and James Brett battling behind. Findlay and Riddell both had their shots at leading the final with Findlay being able to catch a break on the second last lap. The Victorian State Cup winner took his first-round win of the series over Riddell and Tecno Kart racer Garraway. State Champion Brett came home in fourth spot with Fletcher Shaw rounding out the all-important top five.

James Anagnostiadis took out his second pole position of the weekend in KA3 Junior over Joseph Belardo, Alexander Yoannidis, Anthony Alessi and Pip Casabene. Alessi was able to come through and win heat one after Anagnostiadis and Yoannidis came together. Anagnostiadis fought back to take heat two, with Benjamin Munro coming through for victory in the final heat. Alessi and Anagnostiadis battled it out in the final with Alessi coming under heavy pressure in the back end of the race. The local driver was able to take his first round win of the series over Anagnostiadis and Yoannidis. Nathan Emmins after battling at the front in the heats came home in fourth over Belardo rounding out the top five.

KA3 Senior Light was a hotly contested contest with Nicholas Trebilcock taking pole position over Toby Callow and Zackary Thompson. Blake Worboys took an unlikely heat one win after Trebilcock and Thompson made contact. Thompson fought back to take heat two with Callow taking heat three. Aiva Anagnostiadis after not setting a time in qualifying crossed the line second in heat three after making her way through the field. Anagnostiadis in remarkable fashion was able to take the lead in the final but had Callow putting the pressure in behind. Aiva was able to break away in the back end of the race and take a remarkable round victory over Callow and Thompson in third. Earlier pole sitter Trebilcock came home in position four with Jamie Rowe rounding out the top five.

KA3 Senior Medium had Taine Venables taking out pole position in dominate fashion over Ethan Smead and Braden Clark. Venables was able to take out all three heat races with Corey Arnett moving up to second across the heats with Ethan Briggs, Ben Chapman, Braden Clark and Ethan Smead all racing in the top five. Venables led away in the final but the challenge was coming quick from Arnett who was able to take the lead in the middle stages. Arnett was able to come through and take victory over championship leader Venables. Briggs came through to finish third over Smead and Clark rounding out a hotly contested top five battle.

Clayton Groves took the all-important pole position in Victorian Combined Masters over Phillip Stradbrook and Phil Smith. Groves and Smith both took a heat win early with Groves taking the all-important third heat. Stradbrook was not far behind in third from Mark Appleby, Heath Jelbart and David Galley all battling on the edge of the top five. Groves and Smith were battling hard in the final but a brake failure on Smiths kart took both drivers out of contention. In a Steven Bradbury like result Stradbrook was able to come through and take victory over Appleby and Jelbart. Galley came home in fourth spot with Ronald Taylor not too far behind.

TAG 125 Restricted Light had Sebastian Perrone take his maiden Golden Power Series pole position over Rhys Kemp, Flynn Twyford, Gerry Westerveld and Mark Seddon. Perrone was able to back up his pole position with a heat one win with Westerveld coming through to take the second heat. Rhys Kemp was able to take his turn at victory in heat three with the stage set for a great final. Westerveld was able to get a clean start and break away from the field and take his third consecutive round victory. Kemp was able to come home in second with Twyford rounding out your podium. Perrone was able to take fourth place overall with Mark Seddon a further three seconds back.

Clayton Groves made it two pole positions for the weekend in TAG 125 Restrcited Medium. In one of the most dominate displays of the weekend, Groves took out all three heats and the final in a clean sweep. This left Blair Van Ree, Mikhali Triantafillidis, Beau Humphrey and Scott Roberts to battle for the minor spots. Triantafillidis was able to cross the line in second over Van Ree, Humphrey and Chris Brooks rounding out your top five finishers.

TAG Restricted Heavy had New South Wales state champion Ryan Van Ree grab pole position over championship leader Brett Jenkin, Brent Opie and Michael Angwin. Van Ree was able to take out both of the opening heats but Brent Opie in improved pace was able to fight through and take heat three with Jenkins not too far behind. Jenkins got a great start in the final and had his kart in the window to take the lead. Jenkins was able to drive away and take his second consecutive round win in the Golden Power Series. Van Ree had to settle for second place ahead of Opie Angwin and Darren Beattie just outside the top four in fifth spot.

TAG 125 Light was another hotly contested affair with previous round winner Troy Alger taking pole position over Liam Ford and Zackary Thompson. Alger and Thompson were able to share the heat wins with Ford running in the top three and Will Harper looking threatening. The final was an epic race with Alger, Ford, Thompson and Harper all looking a shot of victory. Ford got to the front and was able to hold on by five hundredths of a second over Harper and Thompson. Alger came home just off the podium in fourth with Curt Sera moving up to fifth spot.

TAG 125 Heavy was the final class of the weekend and it was nothing short of the Jason Pringle show. Pringle was able to clean sweep the weekend taking out pole position, all three heat wins and the final! Championship front runner Nikola Schmidt came through in second ahead of Stelios Triantafillidis, Raymond Dumesny and Aidan Solomon rounding out your top five.

Round four of the Golden Power Series restarts on the ninth and tenth of July at the Eastern Lions Go Kart Club.