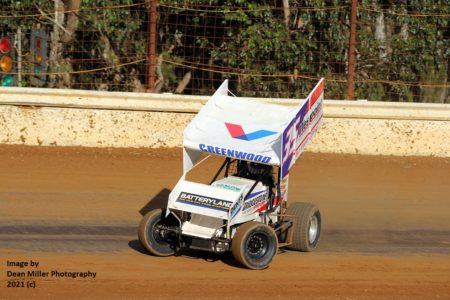 Dirt track fans headed out to Redline Raceway on Saturday night at for the first event of the season, and nobody left disappointed with terrific racing through the four classes, amongst the results was two big wins, Adam Greenwood in the Sprintcars and Scott Whittle in the first ever Standard Saloon Gold Cup. Whilst Dean Heseltine and Travis Ramsdale won AMCA Nationals and Unlimited Sedans, respectively.

The Sprintcar field lined up for twenty-five ‘Wren Diesel’ LS Cup feature race laps and the top qualifier Steven Horton got off to a cracking start stretching out to a one and a half second lead before a caution light brought the race to a stop and the field back to him. Adam Greenwood, Alistair Bastian, Ben Micallef were all in amongst the top three battle at stages before a late run from Dennis Jones catapulted him into the picture as he picked off others in front of him one by one from seventh to an eventual second place.

Horton slipped back in the race as Greenwood, Micallef, Bastian assumed the top three spots and when the chequered flag dropped Greenwood claimed victory in front of Jones, Bastian, Micallef and Horton.

A healthy field of Standard Saloon competitors competed in the first ‘Gold Rush’ feature for the class at Redline Raceway. After the qualifying rounds of three heats each, the top six competed in the ‘Pole Shuffle’ with Bairnsdale racer Josh Thomas moving from his fifth spot to first spot defeating Mark Seller, Matt Domburg, Daniel Stewart, Shane Stewart, and Scott Whittle to get to that spot.

As the field was sent away for their twenty-five-lap final. Thomas got the better of the first lap and led only to pull out of the race due to mechanical issues on lap two in a cruel blow after such a great run to the feature. Shane Stewart in a tight tussle then led Whittle and his brother Daniel Stewart until lap six when Domburg moved into the top three.

From lap seven it was all Whittle at the front. He led Shane Stewart and Domburg whilst from thirteenth place start, Sheerman was fourth by lap seven. Nearing the end Domburg passed Shane Stewart on lap eighteen then Sheerman passed Stewart on lap twenty-four. At the finish, the podium would be Whittle, Domburg, Sheerman, Stewart and Rhys Lansdown.

Dean Heseltine was dominant in the Australian Motor Contest Association, AMCA Nationals. Heseltine won all three of his qualifying races then went on to lead all twelve laps of the final to finish ahead of Steve Lodwick and Frank Thierry. Stewart Grant-Campbell and Alan Saint the first competitor to finish with a 253 Holden engine compared to most of the field who compete with 350 Chevrolet Crate engines.

Rounding out all the results were the Unlimited Sedans. With regular winner at Redline Shaun Lister starting at the rear of the field after racing to get his car fixed in between races so that he could compete in the final. Travis Ramsdale took the lead right from the start and set about putting in some fast laps as he put distance between himself and second. Lister moved past Anthony McKean, Danny Smith, Ian Page and Peter Farley and into third spot and as the race came to a record race time close, Ramsdale was the winner from Susol, Lister, Farley, and Page.

Redline Raceway will next return to competition on February the 5th where Sports Sedans compete for the Master’s feature, Sprintcars return, Street Stocks have their first hit out at Redline for the year and Unlimited Sedans also compete once again.