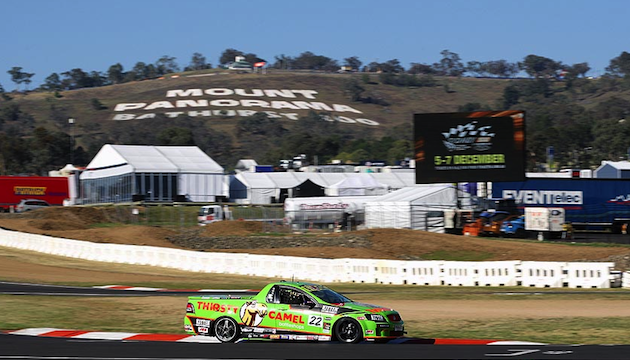 Adelaide’s Craig Dontas will be looking to use the penultimate round of Australian V8 Ute Racing Series – fuelled by Hogs Breath Café on the streets of Surfers Paradise as a return to the points following a trio of rounds that have provided mixed results for the Thirsty Camel Racing crew.

Thursday’s two practice sessions delivered Dontas a top fifteen time in each, however a disappointing result in qualifying due to a broken shock absorber which was discovered at the end of the session would be the start of a string of bad luck for Craig where he would line up in 19th.

The unfortunate results would continue. A post-race five second penalty was issued for an alleged jump start, with the Thirsty Camel V8 Ute seen to be rolling backwards before the race start.

Race two would last just three laps for Dontas with a radiator issue forcing a DNF at the midway point of the shortened six lap event.

The two results from the opening races would have the Thirsty Camel Racing driver starting from 26th for the weekend’s final race, with much wanted race pace returning, seeing him climb the order to 11th in yet another shortened event to round out the weekend.

Craig will now turn his attention towards the second last round of the Australian V8 Ute Racing Series season on the streets of Surfers Paradise on the Gold Coast, the first of two street tracks in a row to conclude the year.

“We had a mixed start to the weekend, ‘the camel’ had some reasonable pace early on and we were putting a lot of focus into finding the right setup to piece together consistent quick laps,” Dontas said.

“Qualifying didn’t go our way and the car was virtually undriveable with the broken shock absorber, and with a five second penalty for an alleged false start in race one, it wasn’t an ideal beginning.

“It was unfortunate to have the DNF in race two and that definitely dented my hopes and confidence of a good result on the weekend, we worked hard following that to bring ‘the camel’ back up to pace for race three and it certainly delivered with a finish in 11th with the pace that would have put us in the top ten with a few more racing laps.

“The final race at Bathurst has definitely given us plenty of confidence leading into the Gold Coast, it’s a very tight track so it will be critical to be on the pace right from the start. I certainly feel as though our setup as the ability to be well inside the top ten, so it will be important to be able to transfer that form into next weekend and onwards from there towards Homebush in December.

“Two DNF’s have hurt us recently, if things had gone our way, a top ten Championship position would be well and truly on the cards. We will be replacing the engine and fitting a brand new shock absorber set before next weekend and that will certainly help to consolidate season results and round out the year on a high with as many good race finishes as possible.

Round seven of the 2014 Australian V8 Ute Racing Series – fuelled by Hogs Breath Café will take place as part of the Castrol Edge Gold Coast 600, Surfers Paradise, Queensland from October 24-26.