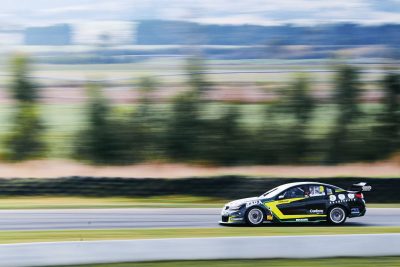 Zane Goddard has displayed improvements at the Tasmania SuperSprint, in only his second round of driving a Supercar.

The qualifying was broken up into two sessions that decided the Race 1 & Race 2 grid, while the starting positions for Race 3 were decided on average times from both sessions.

In the first session, Goddard opted to start the session on his new tyres instead of fitting them mid-session in case of a red flag.

The decision looked favourable as Zane was sitting in the top ten until late in the session when the others drivers fitted new tyres on an improving track, which resulted in a respectable P13 finish.

The second session saw Goddard record his best qualifying result so far, and as the session progressed Goddard’s times improved, producing his best lap in on his third lap which placed him P4 for the majority of the session.

As the times rolled in at the end of the session, Goddard finished in the Top 10 in P9, ahead of many seasoned drivers, including the series points leader.

Starting from P13, Goddard had a rough start off the line when the car bogged and lost some positions on Lap 1, however as the laps rolled off Goddard was able to regain some lost positions.

Goddard was hit from behind in the midst of the tight race which resulted in dropping some places but was able to climb through the field to finish P14.

After a strong start and fighting hard on the opening laps, Goddard was running inside the Top 10 after qualifying P9.

Zane held this position for the first 16 laps before a car rejoined in front, halting his run and getting passed for P11.

The Number 8 car had some strong speed compared to cars around, and Goddard tried to get the place back but made contact in a mistake when light drizzle affected the conditions and damaged his car.

Goddard was able to finish the race with the damage but was crashed into on the way back and fell down the order to finish P22 as a result.

Goddard wrapped up his weekend at the Tasmania SuperSprint with a P14 result, despite losing some positions at the beginning of the chaotic race that was littered with yellow flags and carnage.

Goddard felt like the car had good speed and had some pace, climbing through the field from P17.

“The car felt like it had good speed and had some pace, but I lost a fair few positions at the start with a lot of crashes and incidents. Made some overtakes and finished P14 in our final Race which is good, but now we have some little things to work on but can definitely take our speed away from this weekend.”

Goddard will now prepare for Round 3 of Super2 Series Championship, the Perth SuperSprint, on May 4 – 6.