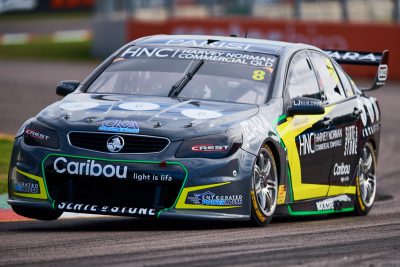 Zane Goddard has finished P9 in the final race of the Townsville 400, achieving his best result yet in the Super2 Series Championship at only his fourth round in a Supercar.

Goddard took to the Townsville 400 Street Circuit for the first time and began the weekend with P13 and P18 finish in Friday’s practice sessions amongst the field of 23.

The #8 Driver finished P15 in Qualifying on Saturday morning and began the race from the 8th Row of the Grid.

Goddard was the second-highest placed rookie in the race, moving up 3 places to finish P12, which was his best result at the time in the Super2 Series.

Goddard’s result was later upgraded to P11 with a penalty handed to a driver directly infront of Goddard after the race.

Goddard qualified P16 for Sunday’s Race and had a good start off the line, fighting to claim positions from several other drivers.

Goddard was able to pass 7 drivers to get into the Top 10 before the conclusion of the 21 laps, making him the highest placed rookie in the field by several positions.

Crossing the line in P9, Goddard bettered his highest finish yet and claimed his first top ten result in the Super2 Series.

“P9 on Sunday, I was super happy with that. The car was great the whole race which helped us push through. Massive thanks to the team and everyone for the support.”

Goddard will now prepare for the Sandown 500, to be held on 14 – 16 September, with all Races to be broadcast LIVE on Fox Sports.