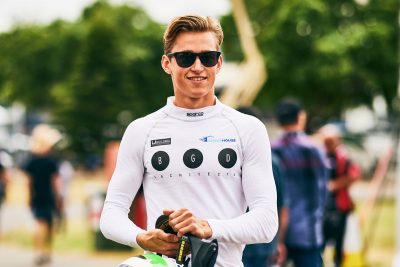 Zane Goddard has debuted for Brad Jones Racing in the 2018 Super2 Series at the Adelaide 500 and produced a P14 result in Race 2.

Goddard began his debut weekend finishing P22 in both of Friday’s Practice sessions on the Adelaide Street Circuit for the first time and later improved to qualify P13 for the weekend.

The BJR Super2 Driver was pleased with his race and keeping the car straight for his first hitout around the Adelaide 500 track, finishing in P15.

Goddard learnt a lot throughout the race felt like as if it was a good start to 2018.

Goddard began Saturday’s race strongly and was defending his position before being spun by another driver and relegated to the back of the field.

The young gun was able to recover and fight back into 14th with the assistance of a well-timed Safety Car.

Race 3 was shaping up well for Goddard who was sitting in P14 after a strong start.

With a few laps remaining in the Race, a rejoining car crashed into the side of Goddard and damaged the car.

Goddard was able to limp the car home to finish P17 and left his debut round of the Super2 Series in 15th overall.

“I’m very pleased with my first Super2 weekend. We finished up with a bunch of points in the bag and a lot of lessons learnt. I can’t wait for Tasmania and a huge thanks to the team, all my sponsors, friends and family for the support.”

Goddard will now prepare for Round 2 of the Super2 Series, the Tasmania SuperSprint on the 6-8 of April.