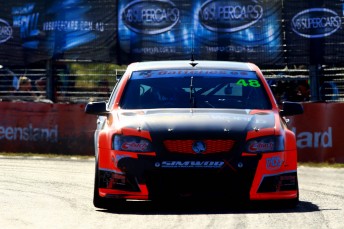 It may look simple to the casual observer, but Queensland Raceway, affectionately known as “the Paperclip” is not as basic as it might seem, according to GMJ Motorsport Dunlop V8 Supercar drivers Geoff Emery, Matt Hansen and Jim Pollicina.The GMJ trio will head to the Ipswich circuit this weekend for the fifth round of the series, and each driver is confident of good results after demonstrating strong pace in the previous round of the series in Townsville.A particularly encouraging factor is the experience of each driver at QR in V8 Supercars; Emery and Pollicina have both contested DVS rounds at the venue, while Pollicina and Hansen have raced there in the V8 Touring Car series, Pollicina scoring his first V8TC race win in 2012.“Queensland Raceway is all about braking, because there are big stops at Turn 3, Turn 4 and Turn 6,” Pollicina said.“Fortunately the MoComm FG Falcon is strong in the braking department and I’ll be looking to use that to my advantage.“The other important factor is tyre conservation; the first two corners are fast and transfer a lot of load through the left side tyres, and it’s easy to overheat the left-rear. With the longer races, we’re going to have to be mindful of looking after the tyres.“The changes we made after Barbagallo were a marked improvement but we didn’t get the results we hoped for in Townsville, due to some unfortunate incidents.”“We’ve had good speed at Queensland in the past; I qualified the R&J Batteries Commodore just outside the top 10 last year,” Emery added.“We’ll be aiming to crack the top 10 in Race 1 this weekend, because Race 2 is a top 10 reverse-grid format.“Queensland used to be a bumpy track, but fortunately they’ve ironed out a lot of the bumps which has made it much more enjoyable for both car and driver.”Hansen said the Dunlop Series field has been close all year, and expects that trend to continue.“When you look at the qualifying times from the first four rounds of the year, I didn’t have to gain much time to improve several positions, and it will be very tight again this weekend,” Hansen said.“A lot of teams test at Queensland but we have two 40 minute practice sessions, so there will be plenty of time to dial a good setup into the Forpark Australia/Australian Custom Moulders Commodore and hopefully we can crack the top 10 for the first time.”