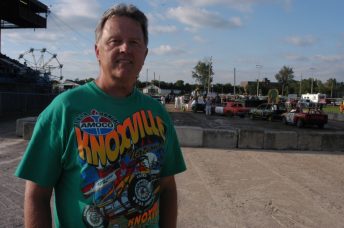 Californian based Randy Lewis has a unique hobby that has taken him to over 2400 race tracks around the world and on New Year’s Eve, he will add Charlton’s Hi-Tec Oils Speedway to the list.

Randy has travelled to over 70 countries in an effort to see as many racetracks as he can on the planet, and his fourth visit to Australia will take on venues from Victoria, New South Wales and Queensland.

“So far this year I have travelled more than 245,000 miles chasing tracks all over the United States as well as in Mexico, Namibia, Macedonia, Ukraine and Canada. I’ve seen racing at more than 100 new tracks this year!”

“Track Chasing” has surprisingly many devotees, with the concept even governed by a list of rules and rankings and is very competitive. However, no one has gone as far and as wide as Randy, often with his devoted wife Carol, chasing tracks in the most unexpected parts of the world and posting his journey on randylewis.org

Randy has become somewhat of a celebrity at events, and will be available for photos and autographs on the night as well as being interviewed by the team at Hi-Tec Oils Speedway during the show.

The event boasts a massive entertainment line-up of Freestyle Motocross, Fireworks, a Demolition Derby and the Super Sedan Summer Slam with 30 of the best drivers in the nation including five former national champions.

Tickets are available from 3pm at the gate or right now from speedwaytickets.com.au

For more details and updates, check out www.toowoombaspeedway.com or the H-Tec Oils Speedway Facebook page.