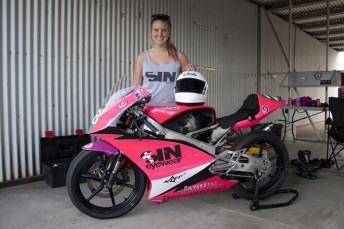 Local Queensland rider Tayla Relph is looking forward to showing her craft to her friends and family when she takes on her home round of the 2015 Yamaha Motor Finance Australian Superbike Championship presented by Motul Pirelli this weekend.

With the second round making its way to Morgan Park in Queensland, Relph will be in action in the highly competitive Honda Moto 3 /125GP class, and will be hoping to show off her wares on the track.

Relph has been riding motorbikes since she was three years old, and the recently turned 18 year-old has been road racing for the past six years.

Speaking ahead of the event, Relph admitted she is looking forward to riding at her home track, and all the benefits that come along with it.

“I am really excited to be going to my home track, I have spent a fair amount of time and put in a fair few laps around Morgan Park,” she said.

“It kind of feels weird leaving for the race the day before it’s actually on instead of a week before so it will be pretty good not having to have that travel.

“I have a few of my friends coming out to watch me ride and a few that don’t really know so much about the sport, so it will be good having a few of them come out to realise what my life is kind of like at the racetrack!

“They kind of see it as a bit of a sport, but they don’t actually know what it actually means to me racing, so it should be good having all my supporters out there and all my friends out there to help cheer me on, and hopefully get a podium.”

Relph is hoping to make up for some bad luck in the opening round by finishing on the podium at weekend’s close.

“Fingers crossed, the same as anyone else I would love to win a race, but just getting on the podium would be awesome.

“I was robbed from getting on the podium down at Phillip Island in round one when I was in third place and I crashed on the last lap of the race, so hopefully I can get that back again and any podium finish would be awesome!”

For all the latest news and information from the second round of the ASBK Championship at Morgan Park, stay tuned to www.asbk.com.au.

To find out more about Tayla Relph, visit www.taylarelph.com.au.