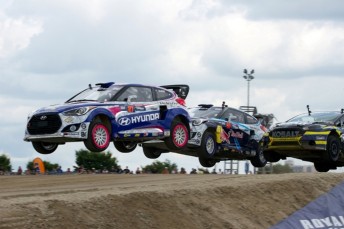 Emma Gilmour’s race craft skills have been sharpened this weekend, with the talented Kiwi showing her claws and rubbing panels with the top guns at the Red Bull Global Rallycross Championship’s (GRC) fourth round in New York.

A confidence boost associated with some new-found speed in her Rhys Millen Racing Hyundai Veloster Turbo rallycross car saw Emma only just miss out on a spot in the final today, behind her team owner.

“I had an awesome LCQ [last chance qualifier], dicing with Rhys all race before he pipped me for 4th and the final spot in the final. What a buzz!’’ Emma says.

The weekend was a series of pluses for Emma, who qualified 10th and enjoyed some elbows out racing in her two heats and LQC. Coming from a rally background, where protecting your car is a priority, she has been changing her mindset to accommodate the rubbing is racing mentality that is predominant in the GRC.

“I got to really mix it up with the other drivers and all the guys I was dicing with [Patrik Sandell, the previous round winner and X Games medalist Bucky Lasek] have been on the podium in the previous three rounds. I’m starting to come to grips with it all, since I’ve got better speed. I’m just a bit green at this sort of racing but at least I feel like I am learning the more aggressive race craft now.”

Emma was also feeling much more at home in the 600-horsepower Veloster after the Volkswagen Rallycross NY, the series’ inaugural event in New York at the Nassau Coliseum Memorial.

“Everything gelled a bit more. I had more time with the engineer and mechanic last week before the race, which meant I had the car set up more how I like it,” Emma says.

After a few mechanical issues in practise, the Veloster was not 100 per cent in the heats, due to changes made to correct it. However, in the first heat race Emma got an impressive start and went round three cars on the outside of the first corner to get into third.

“Then I made a few mistakes with when to take the shorter joker lap and not being pushy enough, so slipped back to sixth but stayed with the group.”

Heat two was another good learning experience, with Emma finding herself again mingling with the ultra-competitive field, which is often only separated by 0.7secs.

Staying on in the United States for next weekend’s fifth round in Charlotte, Dunedin-based Emma is looking forward to keeping the momentum up and fighting hard for her first spot in the final.

“Thanks to my awesome Rhys Millen Racing crew Barny, Spence, Eric and the rest of the team. Bring on the next round.”