Gilmour welcomes a return to the Canterbury rally roads

Gilmour welcomes a return to the Canterbury rally roads 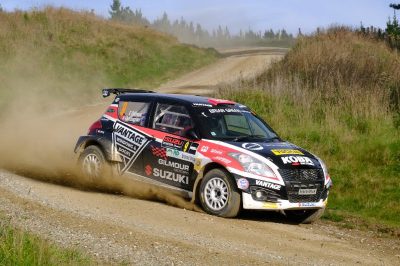 Emma Gilmour and co-driver Anthony McLoughlin won the Lone Star Rally of Canterbury two years ago and would love to repeat that feat this Sunday in the Vantage Windows and Doors Suzuki Swift AP4 pic: Geoff Ridder

A return to forestry roads for the Lone Star Rally of Canterbury on Sunday, will be welcomed by Dunedin rally driver Emma Gilmour.

They were the scene of her historic first national rally championship win by a female driver two years ago and she finds the often tight and twisty stages to be a great leveler for the front-runners.

This third round of the Brian Green Property Group New Zealand Rally Championship (NZRC) will feature just over 160 competitive kilometres, plus the added challenge of two night tests, over 10 special stages in North Canterbury’s Okuku and Ashley Forests.

“I enjoy the Canterbury forest stages as they are more technical and suit the strengths of the new generation cars, like my Vantage Windows and Doors Suzuki Swift AP4. Our suspension travel package is designed to soak up the bumps and the rougher nature of these roads and top-line speed is not as much of an advantage, as it was on the smooth county roads of the previous two rounds in Otago and Whangarei,” Emma says.

Canterbury has the season’s only stages run in the dark and after Service 4 in Rangiora, Emma’s team will fit her Hella light pod onto the Suzuki’s bonnet for the final two tests.

“Rallying at night is a whole different ball-game. You lose your peripheral vision and it is hard to gauge your speed for braking points. Bumps and crests are also more difficult to see on approach,” Emma says.

WRC driver Hayden Paddon has not entered this round, which frees up the competition for the 66-team field. Emma and co-driver Anthony McLoughlin are seeded third and are looking to battle with the other NZRC front-runners to make the most of the points on offer. Currently sitting third in the championship, Emma has made further improvements to the Suzuki over the past month, and is looking to turn them into an outright result.

The Lone Star Rally Canterbury begins with a ceremonial start outside the Christchurch Lone Star at 26 Manchester Street from 4pm on Saturday. The first car starts from Joe’s Garage, Alfred Street, Rangiora, at about 9am on Sunday. Emma’s supporters can see her and the Suzuki at the service park throughout the day, which is located at the Waimakariri District Council Car Park, Rangiora. The first car finishes about 7pm back at the Lone Star.

Rally fans can follow the Lone Star Rally of Canterbury at www.chrissport.co.nz or tune into the NZRC Facebook or Livestream., where the NZRC results team from Chrissport, hosted by Chris Grant, will provide a 5-minute update on all the action from the past two hours at 9am, 11am, 1pm and 3pm.