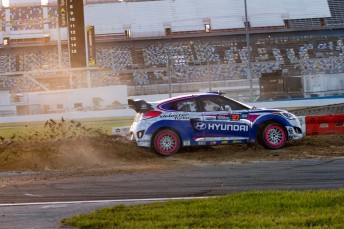 Emma Gilmour ahead of the LA round this weekend

Emma Gilmour is looking to maximise the extra seat time at the Red Bull Global Rallycross Championship’s (GRC) only double-header round of the season, in Los Angeles, this weekend.

The Dunedin-based driver is the sole female racing and has only four rounds left to show her speed in the 10-round series and secure a return drive for 2015.

“I’ve made a few changes with my setup to match changes Rhys has found to improve performance. Hopefully it will keep the same momentum going for our team after his win at the last round in Florida.”

Emma also had some more driver coaching with Rhys, which gave her technique a boost.

“It was really good to sit beside him in shakedown and learn a few new tricks.”

Both RMR drivers will be mindful of looking after their Hyundais over the two days of racing on Saturday and Sunday – which count as rounds seven and eight on the schedule – instead of the traditional one day.

The nine-turn, 940m water front course at the Port of Los Angeles in San Pedro features all of the GRC series’ signature elements. A wide start takes drivers into a sweeping first corner.

After a sealed section with corners of increasing technicality, drivers encounter a dirt section, with the joker lane breaking away in turn six and allowing drivers to bypass the jump.

The Los Angeles joker lane will take drivers through the final three turns of the course, making it the longest joker segment of the season.

In her debut GRC season, Emma has had some great tussles with these big-name drivers and is looking forward to mixing it up with them on a GRC circuit again.

“My aim for the weekend is to keep improving and to really finish the season strongly over these next four rounds.

Her popularity with the fans is high with Emma currently in second place in the Red Bull GRC Fan Favorite Driver of the Year Award.

Voting will close at midnight on Tuesday, November 4, 2014.