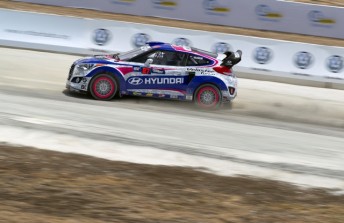 It would be fair to say Kiwi rally driver Emma Gilmour is clocking up some serious air points this year as she jets away again this week to the United States to race.

The Dunedin-based Suzuki dealership owner is heading to Washington, DC, where she will compete in the third round of the Red Bull Global Rallycross Championship (GRC) this weekend.

This will be her first stand-alone GRC event, as the Barbados opener was held in conjunction with the Top Gear Festival and the second round was hosted by the X Games in Texas.

“The crowds so far have been huge and so supportive of me as the sole female racing against all the guys, so it will be interesting to see what kind of fan-base GRC has in Washington,” Emma says.

Tight time schedules have meant she has had limited seat time in her Rhys Millen Racing Hyundai Veloster Turbo rallycross car and she is looking forward to getting better acquainted with the 600hp power house.

“Travelling back and forward from New Zealand means I arrive just before the official practise, and then it’s straight into the qualifying and heats. At this third round, I am keen to set the Veloster up to suit my style of driving more, now that I’m getting more comfortable with going wheel to wheel with some of the world’s top drivers,” Emma says.

She was thrilled to reach the semi finals at the X Games earlier this month and although the frantic nature of the rallycross racing – where the drivers jostle each other at manic speeds through tarmac and gravel courses, featuring gigantic jumps – highlighted she still has a lot to learn, Emma is simultaneously enjoying herself and improving.

After Washington, Emma will dash back home for the fourth round of the Brian Green Property Group New Zealand Rally Championship (NZRC), driven by VINZ, the Trusthouse Racetech Rally Wairarapa  on June 28. Switching back to her Suzuki Swift Maxi, and teaming up again with Australian co-driver Ben Atkinson, she is hoping for a positive outcome over the one-day, 180km event.

“The last round in Canterbury didn’t go our way with an overheating problem ending the rally early for us, so since then the team has made some quite drastic modifications to the engine. We really hope we have got to the bottom of the issues this time,” Emma says.