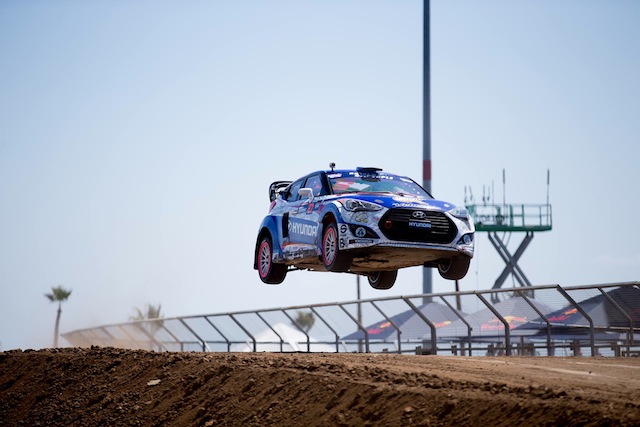 Emma Gilmour in action at the Los Angeles round of the Red Bull Global World Rallycross Pic: Larry Chen

The Red Bull Global Rallycross Championship (GRC) finale next week promises to be full of all the glitz and drama its host city of Las Vegas is infamous for and Kiwi driver Emma Gilmour plans to put on a good show.

Her Rhys Millen Racing Hyundai Veloster Turbo will be running an identical set-up to her team owner and Emma would still dearly love to nail a place in the final.

“It is such a competitive series but I have been steadily improving over the past nine rounds and with nothing to lose I plan to go all out. I want to have some fun and enjoy this last round,” Emma says.

Practice and qualifying will be held on Tuesday, with the heats and final on Wednesday (US time, so Wednesday and Thursday NZ time) at the LINQ Hotel and Casino to coincide with the annual SEMA Show – a huge automotive specialty products trade display. The parking lot adjacent to the LINQ Promenade and the base of the High Roller – the world’s tallest observation wheel – will be transformed into a high-octane motorsports playground, featuring dirt, asphalt and the GRC’s signature tabletop jumps.

For the first time in the championship’s history, four drivers enter the final with a chance at winning the title. They are professional rally driver Ken Block, former Formula 1 stars Scott Speed and Nelson Piquet Jr., and defending GRC Lites champion Joni Wiman. Combined, the four championship-eligible drivers have four victories, 16 podiums, and eight poles so far in 2014.

Emma wants to thank her fans for supporting her recent, successful merchandise campaign and hopes to spot a few wearing her ‘This Girl Can Pedal’ T-shirts in the crowd.