Gilmour moves up to third in the NZRC after Whangarei

Gilmour moves up to third in the NZRC after Whangarei 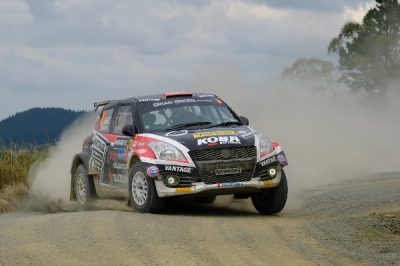 After a close-fought battle, Emma Gilmour and co-driver Anthony McLoughlin were fourth in the Vantage Windows and Doors Suzuki Swift AP4 at the ENEOS International Rally of Whangarei this weekend pic: Geoff Ridder

Showing the pace she’s always been capable of, Emma Gilmour narrowly missed out on podium position at the ENEOS International Rally of Whangarei, finishing fourth after an on-going battle and moving up to third in the national championship.

Driving a Ford Fiesta R5, Quinn hit today’s eight special stages at pace and although Emma stayed within seconds of his stage times, she ended the event 34.2 secs shy of third place. The three-day event was contested across 277km of fast-flowing Northland roads and doubled as the FIA Asia Pacific Rally Championship (APRC) opener and the second round of the Brian Green Property Group New Zealand Rally Championship (NZRC).

“It was a really good competitive weekend and although it would have been nice to be on the podium, we had a great battle with Nathan and banked some important NZRC points,” Emma says.

She has moved up to third in the championship, tied with Matt Summerfield on 43 points, with four rounds to go. Emma described the weekend as extremely positive for the team, with the Suzuki running well and Anthony “doing an amazing job, as always.”

“We came out of the Otago Rally disappointed that our last stage puncture cost us the podium and did some work on the car. We came out firing on the foggy first stage yesterday and got a good break on the rest of the NZRC field,” Emma says.

She and Anthony also achieved third place in the power stage, giving them extra championship points and when the teams returned to Whangarei for a midday service break they were positioned third before repeating the loop of stages in the afternoon.

“Over the second pass we struggled slightly with the roads having more grip and becoming cleaned out as the field went back through. We made some changes to the set-up overnight and the Suzuki ran faultlessly today,” Emma says.

She thanked her team for their hard work over the weekend and also Race Torque, which helped with the Suzuki’s servicing.

The event started on Friday night with a double-run of a 1km super special stage before yesterday’s eight high-speed tests, held north of host city Whangarei. Today’s remaining eight stages took the teams south of Whangarei before the ceremonial finish, held at the Quayside Town Basin.

The NZRC next heads to Canterbury over Queen’s Birthday Weekend for the third round.