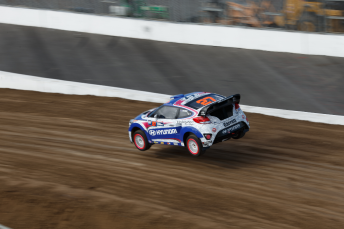 Rhys Millen Racing’s (RMR) inclusion of a spotter – who watches her lines, keeps an eye on the other traffic and tells her when to take the joker lap – helped the Dunedin driver to take third in the first day heat of the double-header round held at water front course at the Port of Los Angeles in San Pedro.

“I have a new spotter Steph Verdier this weekend and he is a driver coach as well – it made a huge difference. He has raced in the GRC before and has driven my RMR Hyundai Veloster Turbo, so he was able to give me lots of really valuable driving tips and techniques,” Emma says.

Unfortunately she was unable to convert the heat result into a place in the final due to the Veloster’s clutch slipping leaving her with no drive. The DNF left her last on the grid for the semis and she ended up sixth on the tight 940m circuit.

“A good grid position and lightening-quick reaction off the start was vital this weekend as there were really no places for over-taking on this track.”

In an eventful Last Chance Qualifier (LCQ), Emma tangled with Bucky Lasek when he got tapped from behind. After a restart Emma was in her element, at least until her luck ran out.

“Another great start, pushing and barging up into fourth place as we go into turn four and then I got spun around and end up on the inside of the corner half across the track.”

Regrettably for Emma there was no restart in this instance.

Racing today for the second consecutive day, she went 0.6secs quicker in qualifying than her best time yesterday. However, she described the semi-final as “a bit rough.”

“I started on last row so it was tricky to get past anyone. I was right on the tail of [Patrik] Sandell but he moved over in the high speed section and we touched which spun me. I kept going and finished fifth.”

Although she stayed with the front-runners in the LCQ, Emma was disappointed not to have made the final.

“We had a mysterious misfire today, which didn’t help but sometimes you just need a little bit of luck to get through these races. It was great to have two races in a weekend to double-up my improvements and to have so much support from the crowd in LA was fantastic.”

The teams have a week off before racing the penultimate round in Seattle this weekend.