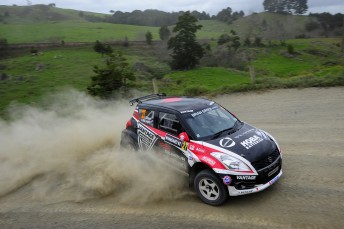 MEDIA RELEASE: In recent rallies she’s been third, then second and now Emma Gilmour wants to take one more step up the podium and claim a win in her Vantage Windows and Doors Suzuki Swift Maxi.

Next weekend’s Rally of Canterbury, the third round of the Brian Green Property New Zealand Rally Championship (NZRC), could be Emma and co-driver Anthony McLoughlin’s time to shine.

“We had a great run at the last round, the International Rally of Whangarei, with the Suzuki running faultlessly and Anthony and I fighting hard for second place,” Emma says.

She sits in fifth place in the NZRC’s 4WD category with three rounds left.

“It was helpful having Hayden Paddon competing for the first two rounds and soaking up some of the top points from Otago and Whangarei. Now we need to make our move and get some more points notched up if we want to try for the overall title,” Emma says.

The 2016 Canterbury Rally is a one-day event on June 5, comprising 171km of special stages in the Ashley and Okuku Forests, with 271km of touring. There are no night stages this year and the route is described by the organisers as being run on “very good forestry gravel roads.”

Last year Emma finished third in her class at the Canterbury Rally. She battled changeable conditions that saw some stages coated in dust and others with snow and ice.

“I imagine this year’s Canterbury Rally will be much the same with a real mixture of conditions. I enjoy the forestry stages, although they can be slippery. The team has been improving the Suzuki in the slower to average speed stages so we will be targeting a win next Sunday,” Emma says.

The event starts with the opening ceremony at Joe’s Garage in Rangiora at 7:40amon Sunday morning and finishes at about 5pm at the Lone Star restaurant in Manchester St, Christchurch.