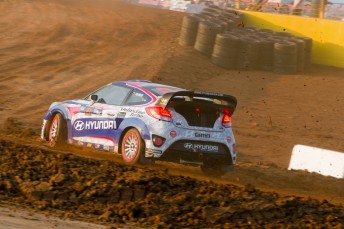 Emma Gilmour sends dirt flying in her Hyundai Veloster Turbo at the Charlotte round of the Red Bull Global Rallycross round last month. Pic: Matt Kalish

While a busy summer of racing winds down for most of the European and United States-based Red Bull Global Rally Cross drivers in Florida this weekend – for Kiwi Emma Gilmour, coming from a cool Dunedin winter, the season is just heating up.

Round six of ten will be held at the Daytona International Speedway and could well be a high-attrition affair as drivers and teams look to enter their month-long break, before the Los Angeles double round (September 20 – 21) on a high note.

Emma will have her elbows out, jostling with the best of them, as she attempts to muscle her way into her first final driving her 600hp Hyundai Veloster Turbo.

“We had a really promising event in New York last month, where I was able to rub panels with the front-runners but unfortunately I wasn’t able to capitalise on those gains in Charlotte the following weekend because of some mechanical problems we had.”

Emma’s Rhys Millen Racing team have been hard at work between rounds rectifying the issues and she had a positive day’s testing earlier this week.

“We just need a bit of luck this weekend. If the car runs well then we can really mix it up with the top guys and hopefully make my first final. I want to start this second part of the season by building on what I learnt in the first five rounds,” Emma says.

She is in 13th place in the points standings, just one below her team boss Rhys Millen, who is currently in 12th.

Friday will see the drivers take part in the practise and heats before the main race day on Saturday.