Gilmour gears up for Rally Waitomo

Gilmour gears up for Rally Waitomo 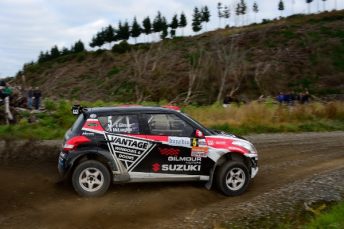 Dunedin rally driver Emma Gilmour is gearing up for one of the toughest events on the 2017 calendar – the Handy Rentals Hamilton Rally Waitomo, in the King Country, this Saturday.

Don’t be fooled by the fact this fifth and penultimate round of the Brian Green Property Group New Zealand Rally Championship fuelled by Gull and driven by Dunlop, is only one day, as it features some monster stages.

Rally Waitomo covers 207km over six special stages in the King Country and Waitomo districts with no repeated stages. Five of the stages are over 30km long and, with the shortest stage still a decent 16km, endurance plus outright speed will be major factors in this rally.

There will be no easing up for Emma and her co-driver Anthony McLoughlin later in the day as the feature stage will be the massive 45km Te Koroha, which doubles as the event’s final and longest test.

“It’s going to be a challenging event. The biggest day will be on the Friday when we have to recce all the 200-plus kilometres of stages. Then we will be checking all our in-car video afterwards for writing the pace notes. We probably expect to finish about 11pm or midnight, then it will be a really big day again on the Saturday,” Emma says.

Rallying is her passion, despite the long hours, and she is looking forward to getting her Vantage Windows and Doors Suzuki Swift AP4 out on the Ohura, Piopio and Waitomo roads.

“After a tough start to the season, we were pleased to finish at Rally Coromandel in August. We had made some changes before that event but they didn’t put us in the right direction, so after some testing this week, we will be setting the Suzuki up differently for Waitomo,” Emma says.

She is aiming for a good clean run over Saturday’s long stages and achieving a solid result.

“I love the roads around there. Last time I was in that area for some of the stages was Rally of New Zealand in 2007. The Waitomo Rally offers some amazing countryside and fantastic roads.”

Along with a number of prime spectator viewing areas through the event, the public will get a chance to view all 81 cars and drivers at the Newstead Lodge Ceremonial Start. It runs from 4.30pm on Friday at Hamilton’s Rototuna Shopping Centre.

The competition starts the following morning from Piopio at 8am. Service stops will be held at Ohura, Piopio and Mairoa. The first car will finish at the Hamilton Car Club on Valie Road at 5.25pm on Saturday evening where the finish ramp and victory podium celebrations will take place.