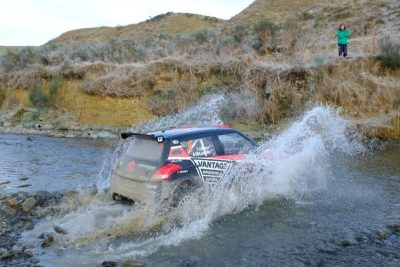 Emma Gilmour has finished a credible fourth in Saturday’s Stadium Finance Rally South Canterbury, among what was arguably the strongest-ever field for a non-international New Zealand rally.

Driving the Vantage Windows and Doors Suzuki Swift AP4, she and co-driver Anthony McLoughlin were only 5.17secs behind third-placed Darren Galbraith and Rocky Hudson.

The 2017 national rally champion Andrew Hawkeswood was second to World Rally Championship driver Hayden Paddon in this fourth round of the Brian Green Property Group New Zealand Rally Championship (NZRC). Dunedin-based Emma has now moved up to fifth overall in the NZRC with two rounds to go.

It was a long and testing day on the roads to the north-west and south-west of Timaru for the 96 teams contesting the 11 different special stages across 195km of competition.

Emma says the conditions were icy, slippery and tricky at the start.

“I had a pretty good spin in the second stage, which cost us a bit of time. We always knew we would struggle in the long straights and high speed stages in comparison to the cars running bigger engines,” she says.

After entering the first service in 12th place, Emma was determined to find her rhythm and blasted through the next set of stages. She clocked two, third-fastest times and a second-fastest stage result – her best times for the event.

“I was a bit frustrated we had a slow start, which made for a hard afternoon playing catch-up. This is my second fourth place for this season and I was keen to make it onto the podium today. The positives to take away however, are that we had good speed, the Suzuki ran well and the team did a great job,” Emma says.

The stages were new to Emma as this event was serving as a round of the NZRC for just the third time and for the first time since 1984.

“The roads were amazing. It was really cool to rally some different stages and have some new challenges. We only had one recce pass over the roads and there were some super-fast sections, which made trust in my notes vital. As per usual Anthony delivered them faultlessly,” Emma says.

The NZRC takes nearly a two-month break now before the penultimate round in the Coromandel on August 18.