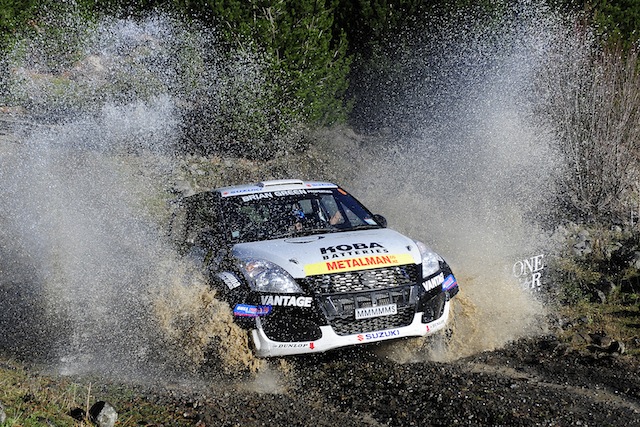 It was with a huge smile and big thanks to her team that Dunedin’s Emma Gilmour finished the Lone Star Rally of Canterbury third in Class 1 in her Vantage Suzuki Swift Maxi today.

Her relief and gratitude were well warranted as despite some strong performances on legs of rallies recently, the Suzuki has had a challenging development period.

“It was great to have a result today after everyone’s efforts over the past few years as we get our Vantage Suzuki Swift Maxi all ironed out. I’ll admit it’s been a battle at times but I just want to thank my co-driver Anthony (McLoughlin), my team, especially my mechanic Lindsay Tressler who has put so much work into the car and all my loyal sponsors,” Emma says.

The 10 stages based on the Ashley and Okuku forestry roads certainly weren’t a walk in the park for Emma. The event started with two night stages on Saturday evening and throughout the following eight tests today there was dust in some sections, while others were coated in ice and snow.

“We had a couple of spins and some intercom problems which made hearing the pace notes challenging but the main thing was we got through to the end,” Emma says.

Auckland driver Ben Hunt won the event ahead of Gull Rally Challenge class leader Timaru’s Darren Galbraith and co-driver Rocky Hudson, while Phil Campbell and Venita Fabbro were third. Although Emma was fourth overall, Galbraith is entered in a different class, which promoted her up to a podium class result.

This top result is a real boost for Emma as she and the Vantage Suzuki prepare for the second half of the national rally season.