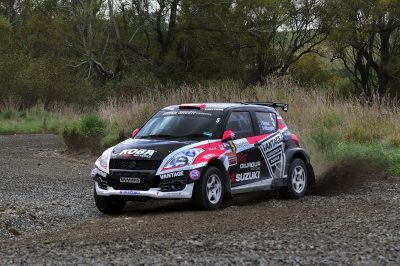 Emma Gilmour and co-driver Anthony McLoughlin are looking forward to the challenge of some new roads in the one-day Stadium Finance 2018 Rally South Canterbury on Saturday pic: Kate Ridder

Rallying for more than a decade means Emma Gilmour has driven on many of New Zealand’s gravel roads, but this Saturday’s Stadium Finance 2018 Rally South Canterbury offers some fresh stages for the Dunedin driver.

This fourth round of the Brian Green Property Group New Zealand Rally Championship (NZRC) covers nearly 200 competitive kilometres and the 11-stages – with no repeats – use roads to the north-west and south-west of Timaru.

South Canterbury has been an NZRC round only twice before, back in the early 1980s, long before Emma’s rally days began.

“It will be great to have some new rally roads to challenge myself, and the field. I never contested the South Canterbury event when it was part of the South Island rally series, but from the photos and videos I’ve seen, the stages look amazing,” Emma says.

She joins a huge 96-car entry list, with Australian co-driver Anthony McLoughlin, who will assist her in writing their own pace notes from scratch.

“It will be a big few days of recce as we only have one pass over the stages to write up our notes. Then we go back to the hotel and watch our video footage and check that we have made the right calls for every corner,” Emma says.

She and McLoughlin will be looking for a podium finish in the Vantage Windows and Doors Suzuki Swift AP4 to ease the disappointment of a DNF at the previous round in Canterbury. The Suzuki’s front diff broke late in the day after contending with the treacherous, muddy conditions. It has been a quick turnaround making the necessary repairs over the three-week gap between rounds and Emma was thankful that both rounds have been South Island-based, cutting down on travel time.

The ceremonial start will be held on Friday at Timaru’s Caroline Bay Soundshell from 6pm. Then the rally gets underway from Timaru at 7.30am on Saturday and finishes back at Levels Raceway from 3.30pm onwards.

The service park at Fairlie is a good place to see Emma and Anthony between stages and watch the mechanics getting the Vantage Windows and Doors Suzuki Swift AP4 ready for its next attack on the South Canterbury roads.