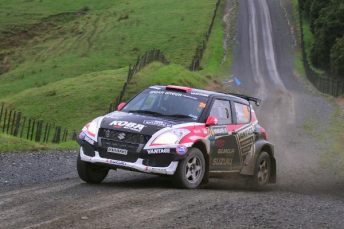 Returning to the event that saw her achieve an historic victory last year, means Dunedin rally driver Emma Gilmour will be taking some special memories into the 2017 Lone Star Canterbury Rally on Sunday, June 4.

She became the first woman to win a New Zealand Rally Championship (NZRC) event and did so in commanding fashion, with Emma and her Australian co-driver Anthony McLoughlin either winning or finishing runners-up in eight out of the nine stages.

“It was really special to win this rally last year. I’ll be channeling that feeling again come next Sunday and using it to help propel us up the points’ table. We still have the championship in our sights and although it will be a climb to get there, we will be going for it,” Emma says.

This year’s event utilises similar forestry stages to 2016 and Emma believes her 1600cc Vantage Windows and Doors Suzuki Swift Maxi is well-suited to this type of terrain.

“We seem to perform well in the tight, twisty stages, as our stage win in the forests at April’s Otago Rally showed. I also enjoy the challenging conditions Canterbury always seems to throw at drivers and if it’s anything like previous years, we could well come across snow and ice,” Emma says.

The Canterbury Rally is round three of the Brian Green Property Group NZRC and although it is only a one-day event, it is a long day for teams and their crews with 10 stages on the itinerary – starting at 8.30am from Joe’s Garage, Alfred Street, Rangiora. Teams will contest about 200km of special stages on well-formed forestry gravel roads in the Ashley and Okuku Forests.

Two of the stages will be held at night, requiring the Vantage Windows and Doors Suzuki Swift Maxi to be fitted with Hella spotlights in its bonnet-mounted light pod.

“I can’t wait to drive the night stages after a full day of rallying in the Ashley Forest – it will be a real challenge,” Emma says.

The service park hub will be located at Rangiora and the rally cars return to it five times throughout the event, before they finish at the Lone Star Christchurch at 26 Manchester St, with the first car arriving at 7pm.

Emma’s fans can catch up with her at the Saturday, June 3, night start ceremony for all cars and teams at the Lone Star Christchurch from 3.45pm.