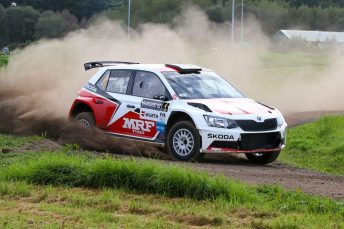 Mladá Boleslav, 8 August 2017 – With the third round of the 2017 FIA Asia-Pacific Rally Championship (APRC), International Rally of Johor in Malaysia (11–13/08/2017), coming up the title fight so far is the most exciting since years. After reigning champion Gaurav Gill and co-driver Stéphane Prévot (IND/BEL) of Team MRF ŠKODA won the opening round in New Zealand with Ole Christian Veiby and Stig Rune Skjaermœn (NOR/NOR) finishing second, the Norwegian pair fought back with a victory at Rally Canberra in Australia ahead of their teammates. In the championship standings Veiby is now leading with two points ahead of Gill. With two ŠKODA drivers fighting for the 2017 title the Czech manufacturer brand can look back on unparalleled success in the APRC. Every championship winner since 2012 was driving a ŠKODA. Now the brand is aiming at another title with the most successful rally car in its category, the ŠKODA Fabia R5.

ŠKODA youngster Ole Christian Veiby is well prepared for the Malaysian adventure. After strong results in the World Rally Championship (WRC 2) – and his maiden category win at Rally Poland – he currently lies second in the WRC 2 standings. At Rally Finland he was in the lead again before going off the road in spectacular style. After the third APRC round, the China Rally, was cancelled due to logistical reasons, teammate Gaurav Gill on the other hand returns to competition after a break of more than two and half months. He will try to compensate this lack of practice with his experience of having competed in Malaysia in recent years. ŠKODA Motorsport boss Michal Hrabánek emphasises: “Although I am really looking forward to see another round in the fight between experienced Gaurav Gill and our promising newcomer Ole Christian Veiby at the Rally of Johor, the victory in the APRC manufacturers category remains our main goal.”

At the Malaysian APRC round, officially known as International Rally of Johor, the teams have to face 14 demanding special stages of 236 kilometres on small, fast and soft gravel roads on palm oil estates close to Kota Tinggi. The rally stages around the city, north of Johor Bahru and close to the border to Singapore, are arguably amongst the best in the country.

Fast, flowing and technically challenging roads all the way through, spiced up with high humidity of more than 80 per cent, temperatures above 40 degrees Celsius combined with heavy, temporary rainfalls are challenging the competitors. “I think, the best way to prepare myself for the rally is to do some work out in a sauna, wearing full clothes and my racing overall,” O.C. Veiby looks ahead to his Malaysian premiere. The International Rally of Johor starts on Friday evening at Johor Circuit, where the winner will cross the finish line on Sunday at 16h00.