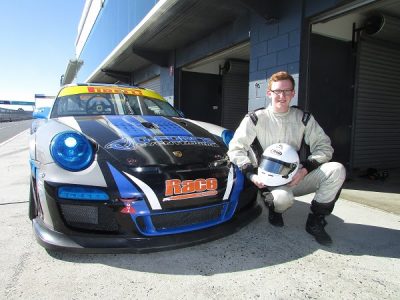 Baulkham Hills racing driver Lachlan Gibbons will fulfil a childhood dream when he races a Porsche at Australia’s most famous motor-racing circuit, Mount Panorama Bathurst, at the end of this month.

The Porsche deal adds to a busy weekend for Gibbons, who has already been confirmed as a starter in the 6 Hour aboard a Subaru WRX STI.

Gibbons tested the Porsche at Phillip Island yesterday and could barely contain his excitement.

“Driving the Porsche 911 for the first time was a hair-raising experience; it has so much more power than anything I’ve driven in the past.

“The grip levels were phenomenal – heading into corners, I was able to carry more speed than I ever thought imaginable.”

Gibbons says swapping between the Porsche and the Subaru at the 6 Hour will be an interesting challenge.

“Also, the Production Sports Car and Bathurst 6 Hour sessions are right next to each other on the race program, so I’ll literally be jumping out of one car into the other.”

Gibbons will share the Porsche with its owner, Greg Woodrow, for the two one-hour Production Sports Car races.

“A big thanks to Greg and G-Force Events Management for the opportunity, I can’t wait to head to Bathurst,” Gibbons concluded.