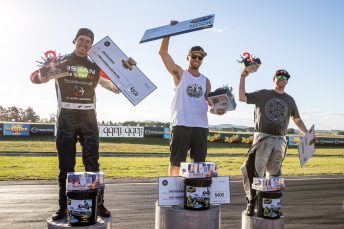 Gaz Whiter confirmed his status as one of the best drifters in New Zealand with a dominant performance in ‘Mad Mike’s’ Summer Bash at Hampton Downs on Saturday afternoon.

The Whangarei builder defeated Darren Kelly in the final battle after almost missing the morning qualifying session with a mechanical issue.

“We had a bit of a shocking start to the day,” says Whiter. “The belt on our new supercharger kept coming off. We got a belt delivered from Pukekohe and the crew managed to get it done just in time for qualifying. My Dad is in charge of the crew and he built the car while I’ve been building my house. It’s just great to come back and prove that I can still drive after a long time out of the seat. I love drifting and I love pushing the boundaries.”

Whiter came out of retirement for the first Summer Bash in February and the prize for defending his title includes an overseas trip to compete in Red Bull Drift Shifters next year.

“I was trying not to think about that,” says Whiter. “The location for Drift Shifters hasn’t been confirmed but that’s a proper prize and it will be a top-class international field. I’ve done some drifting overseas when I was younger but this will be a bit special. I’m doing a full season of D1 NZ next year as well thanks to the help of some great partners including the team at SmartCookie8. It’s great not to have to spend all of your own money burning through tyres!”

Darren Kelly, who defeated event organiser ‘Mad Mike’ Whiddett in a closely fought battle in the Top 8, was gracious in defeat.

“Gaz was just on fire,” says Kelly. “We had some contact in the final four battle with Andrew Redward and that didn’t help us in the final. The car felt a little bit sloppy and I couldn’t stick with Gaz. He opened a gap on me in the first battle and I couldn’t stick with him. In my lead run, I did everything I could but Gaz is a great chaser and a good allrounder so congrats to him.”

There was some consolation for Kelly who teamed up with Redward and Bruce Jenkins to win the Triple Threat Team Event. Redward also took home 3rd place in the Top 32 Shootout as well as the Hard Charger award. Adam Davies won the Insane Entry competition, while South African drifter, George Myburgh won the Spirit of Summer Bash award.

Steve Cox won arguably the biggest prize in New Zealand motorsport history, a Chevrolet Camaro worth $52,000. Cox was the lucky name drawn from the hat from the entries for the Fast & Furious Racing category.

“We came here on the off-chance that we might win a Chevy Camaro,” says Cox. “We had a few dramas with the car on the track but this is just unbelievable. Thanks to 4Guys Autobarn for sponsoring such an awesome prize and thanks to Hampton Downs. I can’t believe I’m driving home in a Camaro!”