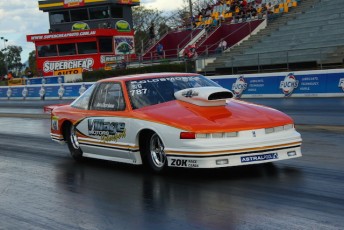 MEDIA RELEASE: Kallangur’s David Gauldie has taken victory in the Super Gas category of the weekend’s round of the Queensland Drag Racing Championships (QDRC) at Willowbank Raceway, despite battling a bad case of the flu.

Four-time and reigning QDRC champion Gauldie was struck down with the flu earlier in the week, but was not going to let that stop him from doing everything he could to remain at the top of the points standings for the bracket.

Heading into the weekend, he was one point ahead of best friend and three-time Super Gas champion Simon Isherwood, so there was no lee-way for missed rounds. After defeating Isherwood in the final on Saturday evening, Gauldie has ensured he holds onto that points lead with two rounds of racing left to run.

“I had the dreaded flu that everyone has probably had by now, but there was never any question, I was always going to participate due to our numbers and the fact that championship points are hard to come by!” said Gauldie. 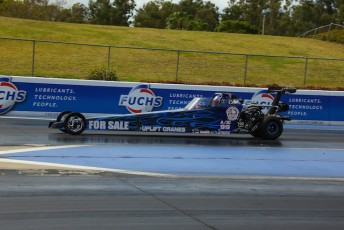 “It was tough to battle on and my wife Stacey deserves a gold medal for helping me through it.

“Between her and my son Cameron they kept me hydrated so we could go rounds, and once I was on the start line the adrenalin would kick in and you would get on with it. It was definitely hard before and after each run though.

“This year has been tough just like every other year, and each year due to the round robin format the other racers are getting more and more practice at racing close.

“I reckon this year has been closer than any other with lots of 9.90s runs and double 0 reaction times making things very challenging.

“Simon is right on my tail and Patrick (Barron) and Dale (O’Dwyer) are not far back either along with Kerry (Boyde) and Darren (Booth), so just one little slip in the rounds could see all that change. They are so close it drives me to try as hard as I can each and every run. 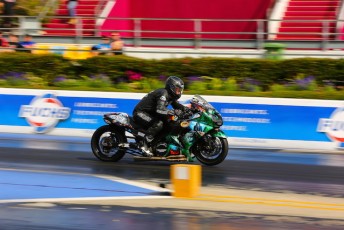 Brian Alvisio was the victor in the Modified Bike category. pic: dragphotos.com.au

“I’ve had some really close rounds go my way and some that haven’t, but that’s racing. All the other guys are great racers and it makes for a great challenge.

“We are extremely happy to take the win – it is the best result we have had so far this year. Whatever happens in the championship, we have really enjoyed the bracket, the racing and the events that Willowbank Raceway has put on for us.”

Kidd’s victory in the Knijff Earthmoving Modified bracket continues a recent female domination of the class – at the last round, Chelsea Leahy won an all-female final from Nikki Usher, after Katie Cunningham had earlier top qualified. This time around, Kidd took on Mark Allan for the win.

“I am one very happy camper! After taking out three round wins and then getting the win in the final in Modified, I was on a mission today. I have the Championship in my sights and want to make my team and family proud,” said Kidd. 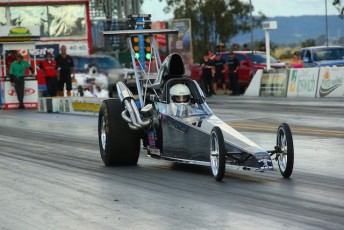 “Across all three qualifying runs, the three rounds and the final the car ran super consistently the whole time and I have to give a huge shout-out to my crew for all their hard work – they are amazing!”

Also on-track for the QDRC was eight year old Rustie Willshire, who made his debut in the Wallace Bishop Loyal Watches Junior Dragster bracket on Saturday. Willshire completed six passes across the day – three for qualifying and three rounds of racing, with improvement on each pass.

The QDRC fight will continue at Willowbank Raceway with its penultimate round on 10 October ahead of a 21 November finale. For more information on the Championship, please click here. 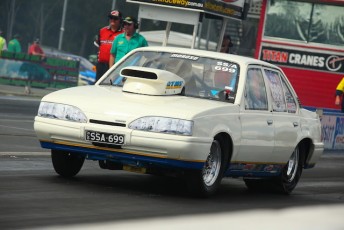 Next up for the Raceway is the APSA Pro Street Shootout, to be held at the venue on Saturday 3 October. Bringing together the toughest and fastest Outlaw 10.5, Pro and Mod Street, Radial, X275, True Street and Pro Bikes in the country at Willowbank Raceway, the event is sure to be a crowd favourite.

For the first time, the Shootout will also feature a buy-in one-shot race to see who has the fastest Radial car in Australia – competitors will be able to buy-in for $500 for a chance to be crowned the ‘King of Radial’ and collect a $5,000 cash prize. On-track action will kick off at 11.00am, with spectator entry just $25.00 (or $20.00 for students with ID cards), while children aged 13 and under gain free entry. 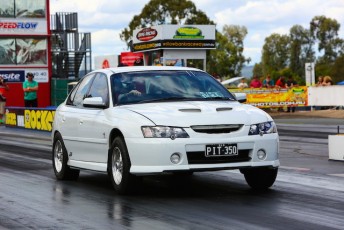