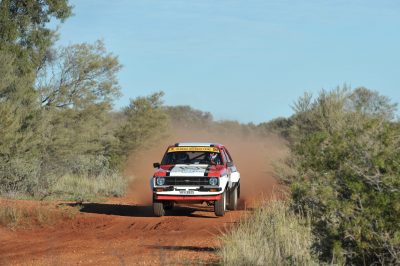 In a little under two weeks, the desert plains of Australia’s Red Centre will come alive when 40 crews from all over Australian plus a few internationals set off from Alice Springs to conquer one of Australia’s longest and most grueling gravel rallies – the 2018 Lasseters Classic Outback Trial (COT) form August 18-25.

Designed for both classic and modern competition vehicles, the field is a step through automotive history with the range of vehicles entered including American muscle cars like the Ford Mustang, 1970s rallying icons such as the Ford Escort and numerous iterations from the Datsun family plus European classics from Porsche, Mercedes Benz and Volvo.

Run as a series of loops in and out of Alice Springs each day, the rally is a true test of man and machine. Over 7 days, competitors will cover 2400km and almost 900km of 32 competitive special stages across varied terrain including fast flat cattle roads, dry creek beds and rugged mountainous tracks.

Perceived as Australia’s version of the world famous East African Safari Rally, the event has attracted interest from overseas in recent years. After dropping out of a strong second place in 2016, Welsh team Viking Motorsport are back with their experienced Argentine pairing of Jorge Perez Companc and Jose Volta in a Group 4 Ford Escort RS1800. Historic racing team Tuthill Porsche have entered one car as have Belgian squad Silver Arrows Racing with the brutal sounding Mercedes 500 SLC.

The Endurance Rally Club of Australia is also conducting a non-speed, regularity event in conjunction with the COT with 17 vehicles competing. A couple of ultra-rare 1920’s Bentley’s are making the trek from Europe along with a range of classic Australian cars such as the EH and HK Holdens.

A prologue stage on Saturday afternoon 18 August at the Finke Desert Race facility to the south of Alice Springs will kick proceedings off before, 7 challenging days of competition. For more details, please visit classicoutbacktrial.com.au.