Gary Paffett: ‘Last weekend was a fairy-tale ending to a great time’

Gary Paffett: ‘Last weekend was a fairy-tale ending to a great time’ 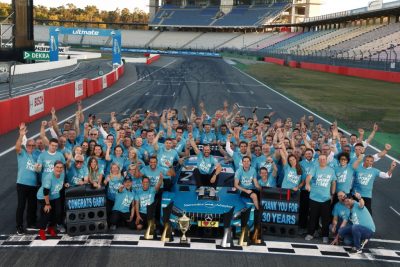 Gary Paffett has done it! At Hockenheim, in the final DTM race for Mercedes-AMG, he claimed his second DTM title after a 13-year wait.

Austin, here we come: Since 2012, the Circuit of the Americas in Austin, Texas, has been hosting Formula 1. Mercedes-AMG Petronas Motorsport have a great record in the US Grand Prix, with Lewis Hamilton having won there four times in a row (2014, 2015, 2016 and 2017). Lewis has actually won six times on American soil – his previous victories were in 2007 and 2012. Pole position has likewise consistently gone to a Silver Arrows driver over the past four years: Nico Rosberg (2014, 2015) and Lewis (2016, 2017). One year ago on the COTA, Lewis and Valtteri Bottas wrapped up the constructors’ title for the team. In 2015, Lewis claimed his third drivers’ championship in the Austin fixture. So it will not come as any surprise that Lewis also holds the absolute track record at the Circuit of the Americas with a lap time of 1:33.108 minutes (Q3, 2017). The fastest race lap was set by Ferrari driver Sebastian Vettel, also in 2017, with a time of 1:37.766 minutes.

Stat Attack – Hockenheim II: What a way to bring the curtain down on the 2018 season and the 30 year DTM history of Mercedes-AMG Motorsport! Third place in Sunday’s final race of the season was enough for Gary Paffett to take his second DTM title. The team is therefore leaving the touring car series having secured the treble of drivers’, team and manufacturers’ titles in its final campaign. During the season, Mercedes-AMG Motorsport DTM scored nine wins, claimed 14 pole positions, clocked twelve fastest race laps and made 28 podium appearances, which makes Mercedes-AMG the most successful of the three brands in each of these four categories. After his first title win in 2005, Gary had to wait 13 years to finish top of the table again. It was business as usual for the newly-crowned champion as early as Tuesday of this week when he was back in a cockpit at the official Formula E tests in Valencia.

In the IMSA Continental Tire SportsCar Challenge, there was every reason to celebrate at the weekend. In their debut season fielding a Mercedes-AMG GT4, TGM won both the drivers’ and team championships. What’s more, they are the only team not to have had a single DNF in the 2018 campaign, going the distance in a total of 776 race laps. Hugh Plumb and Owen Trinkler (both USA) in the number 46 Mercedes-AMG GT4 thus had an impressive second half to the season, with three wins and P3 finishes on five occasions. Fellow Mercedes-AMG GT4 drivers Indy Dontje (NED) and Bryce Ward (USA) in the number 57 car made spectacular progress through the field to round off their season in style with a podium appearance. Starting from 18th on the grid, the Winward Racing / HTP Motorsport pairing took the chequered flag in third place.

European championships in the 24H Series: PROsport Performance enjoyed a double triumph in the 24H Series, winning the drivers’ and team titles in both the general and the A6 classifications. Third place for Charles Putman, Charles Espenlaub and Joe Foster (all USA) driving the number 85 Mercedes-AMG GT3 in the final fixture of the 2018 European Championship was enough for them to wrap up all four titles. The trio were supported by Mercedes-AMG driver Adam Christodoulou (GBR) on several of the race weekends, including this most recent one in Belgium. Lance David Arnold, Tim Müller and Valentin Pierburg (all GER) driving the number 16 Mercedes-AMG GT3 entered by SPS automotive-performance won the A6-AM class at Spa-Francorchamps. Chantal Prinz (née Kroll) in the number 1 Mercedes-AMG GT3 fielded by Hofor Racing took second place in the A6-PRO class and thereby retained the Ladies Cup. The QSR Racingschool trio of Bert Redant, Mario Timmers and Michiel Verhaeren (all BEL) finished top of the drivers’ and team standings in the GT4 class. The 24H Series season concludes with the Championship of the Continents finale at the Circuit of The Americas in Texas (USA) on the weekend of 16th – 18th November, where PROSport Performance are in with a chance of claiming the title.

A championship, a victory and a podium ‘Down Under’: Max Twigg and Tony D’Alberto (both AUS) have won the 2018 Endurance title in the Australian GT which coincided with the finale of the Australian Endurance Championship. At Hampton Down Motorsport Park, Twigg and D’Alberto driving a Mercedes-AMG GT3 entered by WM Waste Management / Scott Taylor Motorsport qualified fifth and finished the race itself in third place. Peter Hackett (AUS) and Dominic Storey (NZL) in the number 63 Mercedes-AMG GT3 were winners in the first round. Hackett ends the Australian GT season in third position after finishing fifth in the main race.

Drivers’ title and podiums in the Blancpain GT Series Asia: Reinhold Renger (GER) is the 2018 GT4 drivers’ champion after the sixth and final event of the Blancpain GT Series Asia contested at the Ningbo International Circuit. The 50-year-old partnered by Ryuichirou Ohtsuka (JPN) in the number 666 Mercedes-AMG GT4 entered by GruppeM Racing secured a class victory and a second place over the weekend to round off a season in which he registered six class victories and three further podium appearances. GruppeM Racing end the twelve-race campaign as runners-up in the GT3 team classification. Indigo Racing also had something to celebrate on the final weekend of the season with two P3 finishes for the duo of Manuel Metzger (GER) and Roelof Bruins (NED).

Runners-up in the French GT4 Cup and victory in the GT4 Sprint Cup Europe: AKKA ASP can look back on a successful end to the season, with the duo of Jean-Luc Beaubelique and Jim Pla (both FRA) having finished second in Race 2 at the Circuit Paul Ricard. The France-based outfit were runners-up in the French GT4 Cup drivers’ and team classifications. In the GT4 Sprint Cup Europe at the Hockenheimring, Gilles Magnus (BEL) finished second on Saturday and first on Sunday. The series was staged part of the support programme to the DTM for the first time.

15 years and two titles later, how would you sum up your time in the DTM?
Gary Paffett: Last weekend really was a fairy-tale ending to a great time. My whole professional career up until this point has been with Mercedes in the DTM. It started amazingly with my first full year in 2004 when I finished second and then won the title in 2005. It happened very quickly. At that point, I thought the DTM was quite easy and I was supposed to go on and win multiple championships. I left for a year, returned and had a couple of tough years, but I fought my way back into the works team and was in contention for championships on at least three occasions. Unfortunately, I only finished second in 2009, 2010 and 2012. The 2012 season was the hardest one – really tough to take. All the years since then have just been hard work. It’s not always been easy. I had years when I wasn’t very comfortable or happy. But the team has kept faith in me, all the way from Norbert and Gerhard to Toto, Uli and Martin. They never lost faith in me, kept me in the team, and this year has just been incredible. The team have given me a car that I can drive fast, especially in qualifying which has been the key this year. I have loved driving the car this year. As I said, it is just a fairy-tale ending to the whole story. Effectively starting my career with Mercedes, winning a championship very quickly and then ending it by winning the last championship for Mercedes for the foreseeable future is just incredible.

If somebody had told you a few months ago that you would win the championship, would you then still have decided to leave the DTM?
Gary Paffett: It’s an interesting question with various aspects to consider. It all started 18 months ago when Mercedes announced they were leaving the DTM. At that point, we all had to find jobs, including the drivers. My initial reaction wasn’t to find a seat in a rival team in the DTM. My first thought was “where can I get with Mercedes from here?”. I have been with Mercedes for 15 years, and I wanted to stay with them. So I talked to Mercedes, to Uli and Toto. I wanted to find out where I could go with the team. Obviously, at that point, I didn’t know I was going to win the championship. One thing I have never managed to do in my life is actually to race with the number one on my car, because every championship I have won, I have left the next year. But I am very happy I have moved on to Formula E. Sure, going back and fighting for a championship as a defending champion would be great, but I think ending my DTM career with a championship is probably even better.

You said at the weekend that this was the best qualifying of your career. What did you mean by that?
Gary Paffett: Honestly, I think it might not have been the fastest lap I have ever driven, but I think it was the most important qualifying lap in my career and one of the hardest. It would have been so easy to give up, drive too hard or make a mistake. To have got P3 on my second lap is even now pretty astounding. Like I said, it wasn’t the fastest lap I have ever driven. I qualified at Zandvoort four-tenths clear of the next driver, which was amazing. Actually, I had a similar occasion in 2005 in Istanbul when I was on pole there and fighting for the championship. I had a similar feeling on that lap. You get past a certain area of the lap which is the most difficult, and once you get past that, you think “this is going to be OK”. The title win this year is the most important in my career. It has been the hardest one to get, and basically, that qualifying lap secured it.