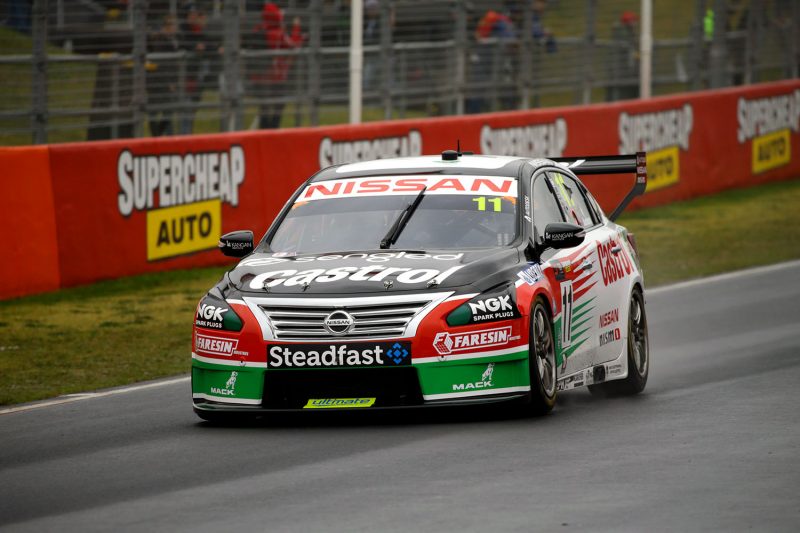 Garry Jacobson has made a strong start to his second Supercheap Auto Bathurst 1000 weekend finishing the first co-driver only session in second position in the Castrol Nissan after being at the top of the 60-minute run for most of it.

A late charge from Alex Premat saw the Frenchman finish marginally in front of the Shepparton racer, who only completed just six laps in the session.

Typical to Bathurst form in October, today’s running has been conducted on a drought-breaking wet racetrack.

Earlier in the day, Jacobson took the MEGA Fuels Nissan to fourth position in opening practice for the Dunlop Super2 Series – the only session the second tier Supercars category had today.

Jacobson reported that he was comfortable in both Supercars and in good signs for the weekend, characteristics from the MEGA Fuels car were transferring seamlessly to the Castrol car – which is carrying a striking tribute livery to the 1993 Bathurst winner of Larry Perkins and Gregg Hansford.

The 26-year-old’s partner this weekend, Rick Kelly, took part in the first Supercars session this morning and will complete this afternoon’s third practice, however not a great deal could be gleaned from the two sessions this morning with teams electing to take a conservative approach with weather predicted to improve for qualifying tomorrow as things build towards Sunday’s 161-lap race.

Fast Friday is a busy affair for Jacobson – with two practice sessions and qualifying for the Supercheap Auto Bathurst 1000 – including another co-driver only session, along with practice and qualifying in the MEGA Fuels car for the Dunlop Super2 race on Saturday.

“With the tricky weather conditions we weren’t sure how much to read out of today because nobody really wants to be the heroes in wet practice and then risk crashing. So to be consistently in the top bunch in both the Supercheap Auto Bathurst 1000 practice and the Dunlop Super2 Series practice was a great start for me.

“There were some similarities with how the MEGA Fuels Super2 Nissan felt to the Castrol car, so I feel like I’m inside the same car when I get out on track.

“That really helps me from a driver’s perspective to be consistent from session to session.

“Tomorrow there’s another 60 minutes in Rick’s car – hopefully weather conditions will be a bit better and then practice and qualifying in the MEGA Fuels car. We’ve been having really, really strong qualifying results in the MEGA machine. I think we’ve got three lap records out of the five tracks that we’ve been to, so Matt White Motorsport have done a fantastic job and the car is handling really well. So I’m looking forward to that challenge tomorrow.

“The guys were really happy with my speed so to be a co-driver that can bring the speed early on and then get all that data in and then know that the car is where it needs to be set up wise and if you drive it right it’ll be fast.

“It is still early days but I think you can say that if we have these conditions on the weekend in the race or qualifying that we’ll be extra calm about going out with what we’ve got.

“With the set up there’s not going to be any drastic changes to the car and we can just be confident that if we’ve gone well today then if the situation occurs in the race or probably further in the week it will be fine.

“I’m very happy with my performance from a driver’s perspective today and I’ll be sleeping well tonight.”