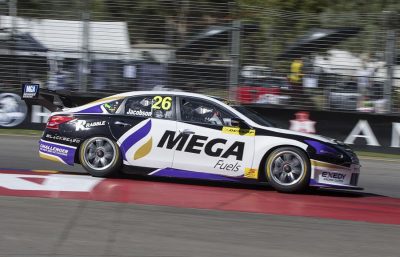 2016 Dunlop Super2 Supercars Series Champion Garry Jacobson has joined forces with multi-faceted technology health and wellness organisation, Rabble, whose aim is to improve the world’s health and wellness by reducing the cost of healthcare to the community and increasing longevity with quality of life.

Rabble is partnering with Arnold Schwarzenegger and his Arnold Multi Sports Festival in Melbourne from March 16 to 19 and Rabble will track Jacobson’s fitness both inside the MEGA Racing MW Motorsport Nissan and in the gym.

For the Supercars fans though, Rabble will be where they can save money and support a company that is investing in young racing talent.

Rabble is launching worldwide with Jacobson at the Adelaide 500 from March 1-4 and also in association with Schwarzenegger’s Arnold Multi Sports Festival from March 16-18 in Melbourne.

“Motor racing is renowned as one of the toughest environments that you can find in sport, especially having a driver strapped into the MEGA Racing Nissan, with cabin temperatures hitting 60 degrees at times, while the driver still maintains composure at speeds over 250kph,” said Rabble.club founder Nathan Thynne.

“We’ve had experience with elite athletes around the world in tracking their activities, but partnering with Garry Jacobson is going to be a fascinating comparison once we get some data from him to compare him to other sports.Garry’s a very fit young driver and has shown great cool under a lot of pressure, which is what excites us about him.”

“We’re also thrilled to be introducing Rabble.club to the Supercars fans. Jacobson – the standout co-driver from last year’s PIRTEK Enduro Cup – is pumped about being at the forefront of the Rabble Movement in Australia.”

Rabble will provide some terrific data to Garry during his Dunlop Super2 Series season, along with helping him maximise his training regime – and he’s excited to involve the fans in saving costs to their healthcare.

“I place a lot of emphasis on my fitness as driving a Supercar for a long period of time is no easy task,” said Garry Jacobson. “Like most people these days, I track my activity through my wearable, but it doesn’t give an overall analysis on how my body stacks up and where I can improve.

“Rabble will really give us some terrific insight and I can’t wait to learn more about myself and where I am at against other athletes in different sports at the same age.

“Most of all though I’m pretty excited that we can get the fans involved in Rabble. As for joining the Rabble team and becoming a Rabble ambassador is super cool.This year we’ve got a new focus with MW Motorsport, MEGA Racing and the Nissan, along with the addition of Rabble. The Title defence last year didn’t go to plan but I can guarantee you this year – I’ll be Back!”