Gardiner takes win in ASKO one hour opener at Teretonga

Gardiner takes win in ASKO one hour opener at Teretonga 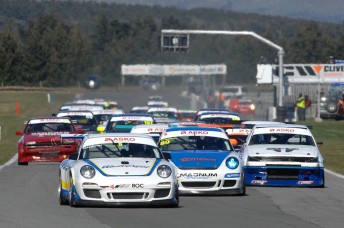 Auckland driver Hugh Gardiner led all the way to take his Porsche GT3 to victory in the opening round of the ASKO One Hour Race Series at Teretonga Park on Saturday.

Gardiner had qualified on pole and completed 58 laps to finish one lap ahead of second placed combination, Hayden Knighton/Garry Cliff of Christchurch in a Porsche GT3 997. Chris Henderson of Dunedin in a 6.2 litre V8 powered Toyota Corolla finished third a further lap behind while the top six was rounded out by Auckland’s Sam Filmore & Australia’s Danny Stutterd, Danny Whiting of Canterbury and Phil Hood. Seventh place went to the Ferrari 458 of Tim O’Conner of Lower Hutt.

The next round of the series takes place at Mike Pero Motorsport Park, Ruapuna, Christchurch on 4 October before the grand finale at Levels Raceway, Timaru on 18 October. The One Hour Race Series is seen as a fun and affordable way to enter endurance racing but still experience the thrill & strategy of the old fashioned tortoise and the hare battles that endurance racing is renowned for.

For the first time this year the series will also double as the 2014 Motorsport New Zealand Endurance Championship.

Thanks to Series sponsor ASKO Appliances as well as class sponsors Mobil 1, Southern Finance, Paul Kelly Motor Company & Hagley Aluminium the Series will again have a significant prizemoney pool that will be paid out across the One Hour classes, as well as major spot prizes that can be won by either 1hr or 3hr competitors.