Gallet is Official Timing Partner to the Silverstone Classic

Gallet is Official Timing Partner to the Silverstone Classic 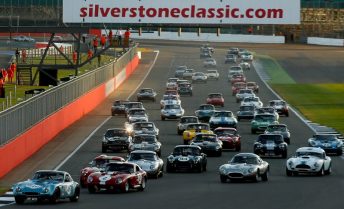 The clocks are counting down to next month’s Silverstone Classic (28-30 July) and – fittingly – the world’s biggest classic motor racing festival has appointed legendary Swiss watch brand Gallet as its new Official Timing Partner.

Gallet was founded in 1466 and has been supplying competition timepieces for many centuries. Indeed, in France in 1894 its stopwatches documented the laps completed at one of the very first motor races ever timed and, thereafter, Gallet quickly became the world’s leading provider of race timing technology.

From those early timepieces and stopwatches attached to clipboards, Gallet’s reputation and influence was furthered with the arrival of its revolutionary ‘Dual Timer’, a device worn around the neck to measure multiple laps with dual results monitoring.

Boasting such proven proficiency, Gallet logically became the first choice for race officials while many famous racing drivers coveted its wrist-worn chronographs. Jim Clark was one of those: he sported a Gallet MultiChron 12H model when winning the 1965 Indianapolis 500 and the Formula 1 World Championship in 1963 and 1965.

Exemplifying its remarkable racing heritage, Gallet will not only be Official Timing Partner to the Silverstone Classic for the next three years but will also take naming rights to the International Trophy grid (photo above), one of the event’s many on-track highlights. It always features a full field of great GT cars including iconic AC Cobras, Jaguar E-types, Aston Martins, Bizzarinis, Healeys, Porsches and other revered racers from the sixties.

The winners of the newly-named Gallet International Trophy for Classic GT Cars (pre ’66) will be presented with Gallet’s groundbreaking new ‘Heritage Edition’ chronograph when deliveries commence later in the autumn.

To be unveiled at the Silverstone Classic with perfect timing, the evocative ‘Heritage Edition’ incorporates the very finest in Swiss watchmaking technology and is an evolution of the Gallet watch worn by Clark in 1965 when winning both the Indy 500 and British Grand Prix at Silverstone. As a limited edition, each ‘Heritage Edition’ timepiece will be individually numbered ensuring the race winners’ receive a prize that is exclusive and will appreciate in value over time.

“We are delighted to be welcoming Gallet as our Official Timing Partner at the Silverstone Classic,” said Nick Wigley, CEO of event organiser, Goose Live Events. “Gallet has a truly remarkable heritage in motor sport and thus its enthusiastic commitment could not be more relevant to an event that celebrates and showcases so much glorious motor racing history.”

Walter Hediger, CEO of Gallet Watch Company added: “We are delighted and honoured to have been chosen as the Official Timing Partner of the Silverstone Classic. Gallet was there during the world’s first auto races and, ever since, our role as the leading provider of timing for the track is well established. Teaming up with such an extraordinary partner as the Silverstone Classic represents a continuation of Gallet’s racing legacy into the future.”