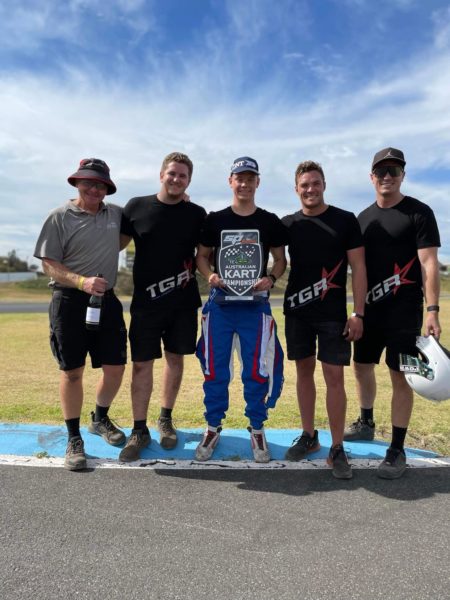 Bailey Sagadak was representing Tyler Greenbury Racing in the highly competitive KZ2 gearbox class. Sagaidak shocked some of his more fancied rivals by putting in a breath taking lap to put his entry on pole position for the opening heats. Sagaidak unfortunately missed the start in the opening heat but raced on gamely to come away inside the top five in fifth position.

Sagaidak unfortunately struck trouble early in heat two resulting in a DNF and having him start out of the top fifteen for the third heat. Bailey put in a mega drive in the third heat, putting himself inside the top ten and continuing to charge just up the order. Sagaidak finished just outside the top five in sixth by the finish flag, with the fastest lap of the race. Sagaidak got another positive start and was running on the edge of the top fifteen but another incident resulted in a DNF hurting his final starting point.

The X30 class had Hamish Fitzsimmons flying the Tyler Greenbury flag in a massive over subscribed field. Fitzsimmons had issues in qualifying, putting him down on the edge of the top fourty with plenty of work to do to start his championship. In the split heats Fitzsimmons was able to move forward in both his heats. Starting around position twenty in both heats, Hamish moved his way forward into the top ten for both races, staying out of trouble and putting him up the grid for heat three.

Fitzsimmons continued his fightback and charged forward further in heat three moving on the edge of the top five in sixth spot. Hamish was driving like a man possessed and went forward another three spots in heat four, coming home inside the top three in third spot.

With both divisions of X30 combining, Hamish had moved up nearly thirty spots from his qualifying effort in a massive achievement. Fitzsimmons once again moved forward in the hectic final crossing the line in position nine overall in a great recovery mission from qualifying!

Armand Hamilton and James Raaymakers were the two junior drivers for Tyler Greenbury Racing taking on the competitive KA4 Junior. Hamilton led the charge in qualifying just missing the top five in a strong seventh spot.

In what was a tough final for the Tyler Greenbury racing drivers, Hamilton got a poor start and then was involved in incidents causing him to have a DNF result. Raaymakers was able to move up just outside the top twenty five in position twenty six with both drivers showing glimpses of brilliance for the rest of the series.

Thomas Gallagher and Finlay Derry were the final Tyler Greenbury Racing drivers in the TAG 125 class. Gallagher showed he wasn’t messing around in qualifying putting himself in the top five with Derry sitting just outside the top twenty in position twenty four. Gallagher was the shining light in the heat races never leaving the top five.

Two thirds in heat one and two, a fifth in heat three and a win in the final heat had him right in contention for victory. Derry ran around the top twenty in all four of his heats with a nineteenth position being the best of his heat results. Gallagher led in the early stages of the final and looked a chance for victory. In a chaotic final, Gallagher just missed out on the win by over a second in second spot.

Derry had his best finish of the weekend in positon seventeen in a fightback from his qualifying spot.

Team owner and manager Tyler Greenbury spoke post weekend. “It was great to get back to racing in the Australian Kart Championship. Thomas did a great spot to land a podium and Bailey being on pole in KZ2 was awesome. We’ll learn from this and regroup and look forward to Bolivar in April”. Tyler Greenbury Racing will be back at the track this weekend for the Ipswich Kart Club Championship round.