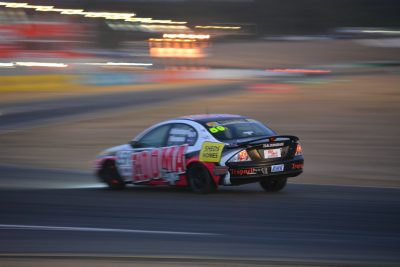 The second and final round of the 2018 Mal Wood Automotive Enduro Cup was contested as part of the Australian Production Cars ‘Fight in the Night’ 300km endurance race held on Saturday night of the Shannons Nationals weekend.

Furness, who made it a clean sweep of the three Enduro Cup races over the two rounds, was ecstatic with the result.

“We started the race well and got into the lead and built a gap. Unfortunately we fell backwards during our pit stops with our few mistakes, but in the last stint the safety car helped us claw our way back,” said Furness.

“We knew we were quick so it was a case of head down, bum up and chased down the lead in the last ten minutes of the race.”

Wickham was quick to dedicate the win to the support from their team sponsors.

“We had the car on the dyno last Saturday at EFI Logic, , big thanks to Tim and Pete who found us another 28 horsepower which certainly helped,” said Wickham.

“We’d also like to thank Zooma Signs for the signage on the car, Mal Wood Automotive for their help with Daniel here this weekend on the radio as well as our diff and gearbox which lasted the distance.

“Finally, a massive thanks to Sheds N Homes Australia for coming on board with us, because without them we wouldn’t have got here this weekend to deliver them with this result.”

The Lighthouse Electrical Queensland Saloon Car Series returns to Morgan Park Raceway for the final two rounds of the season, with round five held at the CAMS Queensland State Championships on September 8-9.