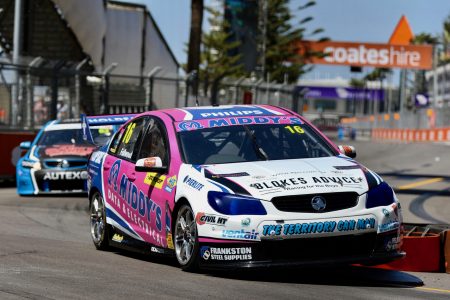 Northern Territorian Bryce Fullwood has completed his 2018 Dunlop Super2 Series season on the streets of Newcastle, in what has been a challenging year.

The 20-year-old finished the final round of the season in his Middy’s Commodore in 13th, although was unable to show the car’s true potential after qualifying ninth for Race 2, with the race classed a non-event after an incident.

“I think throughout the year we’ve been progressing forward with the car and at Newcastle we didn’t really get to show it.

“The car on Saturday was probably good for qualifying fourth, however we encountered traffic on our two flying laps that put me down the order and on Sunday we qualified ninth, the track changed a little bit and it didn’t suit us so much.

“[Sunday’s] race we made a few changes to help with the longevity of the tyre, however in the race I was stuck behind a good friend of mine and was struggling to get past, especially on this track it’s very hard to pass.

“We had quite good speed and we probably had the speed to race around the fifth or sixth mark on Sunday, but track position is key at this circuit.”

Fullwood added he was happy to end the season on a high-note.

“Overall we had a pretty positive end to the year, we’re all nice and happy heading into Christmas,” Fullwood said.

“We’ll definitely be in Super2 again next year, we’re just going through all of the negotiations at the moment … very keen to go again.”

Fullwood is set to enjoy his summer break before he announces his plans for 2019.