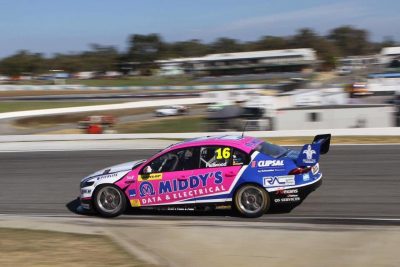 Teenager Bryce Fullwood has reflected on his weekend at Perth, hailing that the race pace of his Falcon in the Dunlop Super2 Series has improved.

Dubbed as one of the toughest series in Australian motor sport, the 19-year-old originally from Darwin finished as high as third in combined practice, with the highest race result of 11th.

Despite the result this weekend, Fullwood was happy to be making ground with the car.

“After Tassie it was a really hard weekend for us, miraculously we went forward in the championship as we were 10th after that weekend after finishing 15th and 18th,” Fullwood said.

“Coming into this weekend we had a test day two weeks ago, which we felt we made some gains with the car, but it’s really tough without being at the event.

“At the test day we went forward, and we felt as though it was going to be relevant for us at the event – which is was, we basically halved the gap … we went from finishing down in the 20s at Tassie and now we’re just outside the 10.

“Obviously not where we want to be still, but otherwise a really good weekend.”

Fullwood’s ex-DJR Team Penske Falcon is the sister car of Matt Stone Racing’s Supercars Championship Falcon, which is being driven by Todd Hazelwood.

The teenager will now prepare for the fourth round of the series at Townsville’s Reid Park circuit, in what Fullwood added he’s really looking forward to the challenge,

“I do like the Townsville circuit, street circuits are always great fun and there’s heaps of kerbs you hit, which makes it good fun,” Fullwood said.

“Hopefully we can go back and do our homework coming into Townsville and get something a little more racy and get ourselves into the top 10.”

Fullwood enters his fourth year of the series this season with Matt Stone Racing, thanking the team and his supporters for their continued support.

“I’d firstly like to thank the Matt Stone crew, they’ve accepted that the car hasn’t been where we need it to be so we’ve done a lot of homework and very fortunate that we’ve made a big step forward.

“Also a thank you to each of my sponsors for sticking with us, Middy’s especially as its our fourth year running with them, as well as Blokes Advice, Accident Repair Management, Clipsal, RACE NT and all of my other proud sponsors.”

The team will now prepare for the fourth round of the series, as they head to Queensland for the Watpac Townsville 400 on 6-8 July.