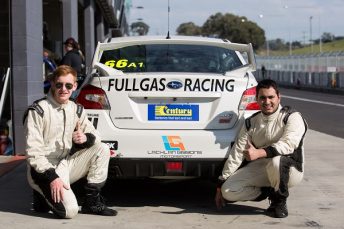 “One of the great things about production car racing is that different cars have strengths and weaknesses at different circuits, which adds variety to the racing,” Agathos said.

“The WRX doesn’t have the top speed of some of the other outright cars, but it makes up for it with great handling and good punch out of slower corners with the all-wheel-drive.”

“At Winton, there are no long straights and there are lots of slow corners, so the top speed deficit won’t be an issue,” Gibbons added.

“We’re also much more familiar with the track – Dimitri has raced there in the Pulsar Series, and I’ve competed in national Formula Ford rounds at the venue.”

This weekend’s race meeting will consist of a pair of 300km races.

“Based on the car and driver combinations entered for the race meeting, we’ll be hoping for top-six finishes in each race,” Agathos said.

“They’re both long races so strategy and reliability will be crucial.”

Sunday’s race will be live streamed via the Shannons Nationals website.